Lieutenant Seal and the rest of LFD’s “A Shift” spent their day last Wednesday taking part in an RIT Class inside the department’s bay at the main fire house.  That’s Rapid Intervention Training.  RIT is where a team of two or more firefighters is dedicated solely to the search and rescue of other firefighters in distress.  Some call it “fireground life insurance.” 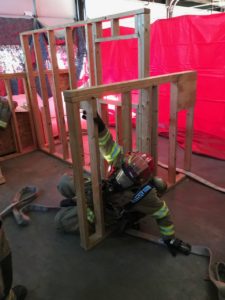 John Earl Seal with the Campbell County Rural Fire Service does the swim move as part of the Pittsburgh Drill.  The practice frame has 16-inch studs just like a standard structure.

Statistics prove that nationwide, more firefighters get in trouble while fighting residential house fires than in any other kind of structure, even though fires in these structures are considered to be a relatively routine “bread-and-butter” event.  Seal has seen a lot in his 30-some years of fighting fires and can only recall just a few events here in La Follette where a firefighter had to be rescued.  “But it’s not the type situation where you want to train on the job.  That’s why we practice and practice,” Seal said. 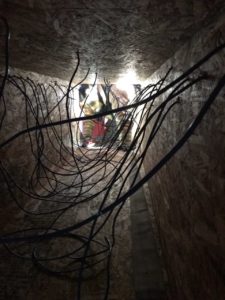 Preparing for the unexpected like this narrow passage way that is filled with cable and wire is also part of the training, according to LFD Captain Eddie Hatmaker.

Training sessions include going through the Denver Drill, the Pittsburgh Drill and others.  Lost lives in very unique and unusual situations are why these drills exist and are part of LFD’s training.  See the many photos WLAF’s Charlie Hutson and LFD Captain Eddie Hatmaker snapped HERE.

The Denver Drill originated more than 25-years ago when an experienced firefighter became separated from his crew after a collapse, along with intense heat and heavy smoke, trapped him inside a storage room leaving only a 28-inch wide access aisle.  What seemed like a simple rescue of pulling him out of a window and climbing down the ladder was not a simple rescue at all.  A lost life is why this drill exists today and why LFD firefighters practice it. 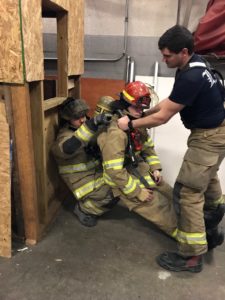 Seal emphasized how critical the repetition of working in a confined space and carrying out such simple tasks like “sounding the floor” is.  That’s when a firefighter uses a tool or a hand to make sure they are crawling or walking on a solid surface.

Three Pittsburgh firefighters lost their lives in the mid-90s, because they ran out of oxygen while battling a routine house fire.  The trio was in the basement of the home when a fireball erupted behind them burning through their hose line and collapsing the staircase.  That’s how the Pittsburgh Drill came to be.

LFD’s “A Shift” also practiced the Pittsburgh Drill where they climbed and crawled through a 50-foot obstacle course, in full gear dragging a hose, that included three obstacles of under, over and through.  The first obstacle is a low profile opening followed by an A-frame and then a crawl through a 12-foot tube to a fallen firefighter and then back again with the firefighter and out.  LFD Firefighter Shawn McGlone points out that the fire gear worn weighs anywhere from 70 up to 150 pounds alone. 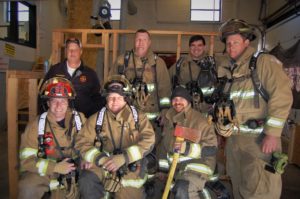 McGlone calls it the hardest training you will ever do, because it’s such close quarters.  He stresses just how critical working to extend air bottles is, because such exertion really uses a lot of oxygen.  McGlone said, “Rescuing a downed firefighter could take anywhere from 20 to 45 minutes to complete the rescue.”

Whatever the maneuver.  Whatever the drill.  La Follette Firefighters practice them with one goal in mind; to save a life and be able to go home after their shift.  (WLAF NEWS PUBLISHED – 01/15/2019-6AM)

One Reply to “LFD Firefighters train to save fellow firefighters’ lives”