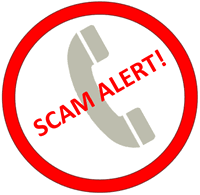 LAFOLLETTE, TN (WLAF) – Phone calls are being made around Campbell County by Publisher Clearing House imposters.  They’re convincing, offering  incentives and motivated to take your money.  One person in La Follette tells WLAF that they called him this morning telling him that he’d won a great big grand prize from Publisher’s Clearing House.  All he needed to do to get his prize was to deposit a $1,500 cashier’s check into a special account under a woman’s name at a Knoxville bank.  During the course of the conversation, a few different men and a woman took part in the conversation.

The almost-victim was even given phone number where the scammers could be reached.  He called the scammers back from his attorney’s office, and a staff member talked to the scammers and told them that this was a scam and to never call this number again.