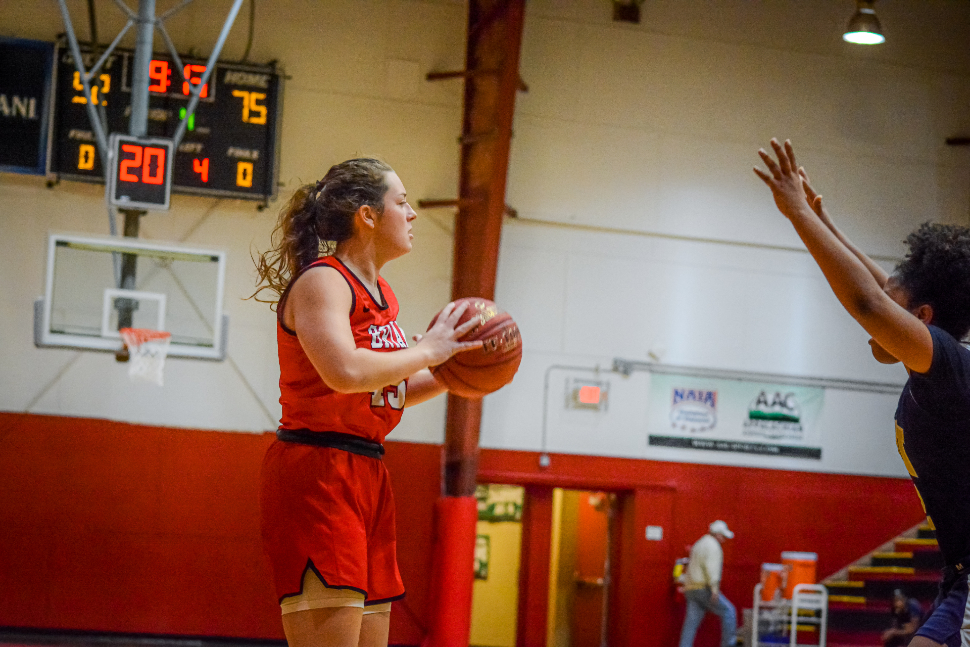 BLUEFIELD, VA (WLAF) – Four Lions scored double-figures over the weekend when the 16th-ranked Bryan women’s basketball team downed fellow Appalachian Athletic Conference opponent Bluefield College 78-58. The road win marked the 20th AAC win of the season for the Lions, as they rose to 20-0 in conference play and 24-1 overall.    The Rams lowered their conference record to 6-14 and overall record to 7-19. The duo of Karli Combs and Deandra Luna recorded a team-high 15 points apiece, followed by Destiny Kassner’s 13 points and Kaitlynn Hennessee’s 10 points. Combs did most of her work from deep and at the foul line, knocking down 3-of-6 beyond the three-point line and 4-of-5 at the charity stripe. Luna’s came on 6-of-14 shooting, including 3-of-8 from the perimeter, as she also led the crew with 4 assists and 3 steals. Kassner’s 8 rebounds trailed only Hennessee who was one shy of a double-double collecting 9 boards. Rounding out the scoring for Bryan was Sarah Cain with 8 points, both Shayla Ludy and Tristan McClellan with 7 points apiece, and Tori Burnette who tallied 3 points.

As a team, the Lions shot 41.5 percent in the outing while holding the Rams to 37.7 percent. Bryan was an efficient 42 percent on their three-point shooting compared to Bluefield’s 35 percent. At the free-throw line, the Lions sank 13-of-17, and the Rams made just 3 of their mere 6 attempts on foul shots. Despite Bluefield outrebounding Bryan 36-32, the Lions made up for it by controlling the ball and surrendering just 5 turnovers. The home team’s carelessness cost them, as they amassed 17 total turnovers.

The closest Bluefield would come to Bryan in the conference showdown was midway through the opening period when the Rams were able to come back from a 4-point deficit at 9-5 and tie the count 9-9. From that point on, it was all Bryan, as the Lions clawed their way to 6 straight points thanks to a mid-range jumper from Hennessee, another mid-range score but this time by McClellan, and then a pair of free throws from Ludy. Luna capped the period with a three-pointer, putting the Lions on top 18-13.

The Rams opened up the second quarter with a bucket to slim the margin to three points, 18-15, but the next 12 points were secured by the Lions to help create a 13-point separation, 30-17. The scoring slowed the last few minutes of the first half. Bluefield responded with back-to-back treys, Hennessee drew a foul and hit the free throws, and the Rams found the bottom of the net in the closing moments to make it a 7-point ballgame at the break, 32-25.

Bluefield was looking for a spark at the start of the third frame, and a three-pointer on the opening possession looked to be just what they needed, as the Rams came within 4 points, 32-28. Instead, Hennessee dropped in a quick two on the opposite end, Combs assisted Kassner for a score underneath, and Kassner made a pair of foul shots to lock in a double-digit lead that was nearly maintained for the rest of the game. The Lions took a 54-43 lead into the fourth and final quarter.

The only time that Bluefield narrowed the difference to single-digits was at the eight and a half minute mark at 56-48, but Cain stepped up with two consecutive big-play three’s that launched Bryan ahead 62-48. Even with a comfortable lead, the Lions continued with a persistent attack, eventually fashioning their biggest cushion with 49 seconds on the clock when Burnette rained down a long three-pointer to go up 78-56. The Rams were the last to get on the board, as the Lions took home the 78-58 victory.

With only four regular-season home games remaining on the year, three of which are home games, Bryan resumes their journey of another undefeated AAC record. The Lions’ next opponent is the Point University Skyhawks (Ga.) who Bryan will host on Wednesday, Feb. 12 at 5:30pm. The meeting will be the first between the Lions and Skyhawks this year. Point owns an overall record of 13-12 and conference record of 10-11.  (WLAF NEWS PUBLISHED – 02/11/2020-6AM)