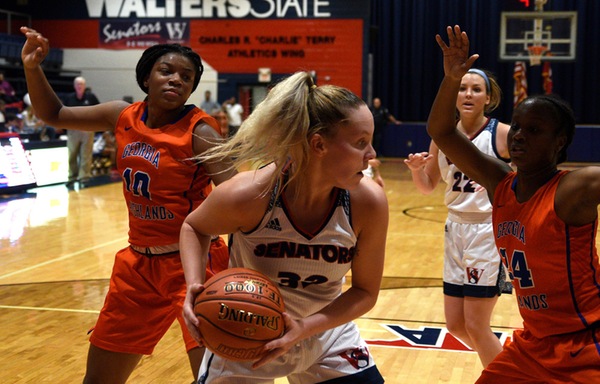 an assist and a block in Walter State’s conference win on Saturday against Volunteer State.

Shultz tied the Walters State record with seven three-pointers and poured through 27 points as the Lady Senators upped their league mark to 13-2. Coach Dave Kragel’s club is now 16-9 for the season.

It was Alumni Day and Shultz had a great game before a large contingent of former players for both the Lady Senators and Senators. She split her points almost evenly by scoring 13 in the first half and adding 14 in the second.

The Lady Senators were in control and never trailed, but couldn’t put the game away. They led by only 10 with 4:41 left in the game before pulling away down the stretch.

Kragel said, “This was just a really good win for us today.

“I thought Blayre shot the ball extremely well for us and I really thought Paris played well for us. She did a much better job in the post,” the coach added.

Kragel went on to say, “We did some things well as a team but we still have to do a better job of getting to their shooters. We got to them, but we didn’t do it quick enough.

“I think our team continues to get better,” he said. “We’ve gotten better in the last few weeks. I don’t know if we’re doing it quick enough, but we’ll find out when we go to Memphis next weekend. That will be a tough road trip and we’ll have to be ready to play.”

Kragel also talked about seeing so many of his former players in attendance. “It was really nice. There were people here that played on my very first team here and people here from last year’s team. I don’t know exactly how many were here but it was really neat to see them and get to chat with them.”

The Lady Senators are one game up in the loss column over both Chattanooga State and Cleveland State with three games remaining.

Mullins pulled down 10 rebounds to propel the Lady Senators to a 34-30 advantage. Williams grabbed a dozen stray shots for the Lady Pioneers and Dynia Douglas had 10.

Alexis Thrice helped the victory as she scored seven points, had six assists and four steals.

After Mullins’ big start put the home team in front 10-2, the Lady Pioneers battled back within 10-7. Vertonia Bady knocked down a trey for Walters and Shultz added another after two foul shots by Douglas.

Baskets by Kiera Hill, Shultz and Quentarra Mitchell gave the Lady Senators a 33-17 lead at the first rest stop.

Haley Comer scored to start the second frame, Rogers hit a basket and added a free throw and Shultz added a triple as the lead grew to 10 at 30-20. Vol State then battled back within three before Thrice popped in a three to give Walters State a 40-34 lead at intermission.

Thrice’s second three of the game gave the winners a 50-36 spread, but the visitors chipped away and got within 52-43. Shultz knocked down three straight triples and Rogers added a basket in the final 3:21 of the third and the Lady Senators took a 63-47 margin to the final 10 minutes.

Midway of the final frame, Volunteer State scored eight straight to close within 67-58. Comer hit a foul shot and Mullins scored before Williams’ basket got the margin down to 10 with 4:41 left.

That was the final basket for the Lady Pioneers as the home team closed it out with a 17-2 spree to win going away.

Walters State gets a week off before a road match-up against TCCAA rival Southwest Tennessee next Saturday. Tip-off is set for 3 p.m.  (WLAF NEWS PUBLISHED – 02/11/2020-6AM)