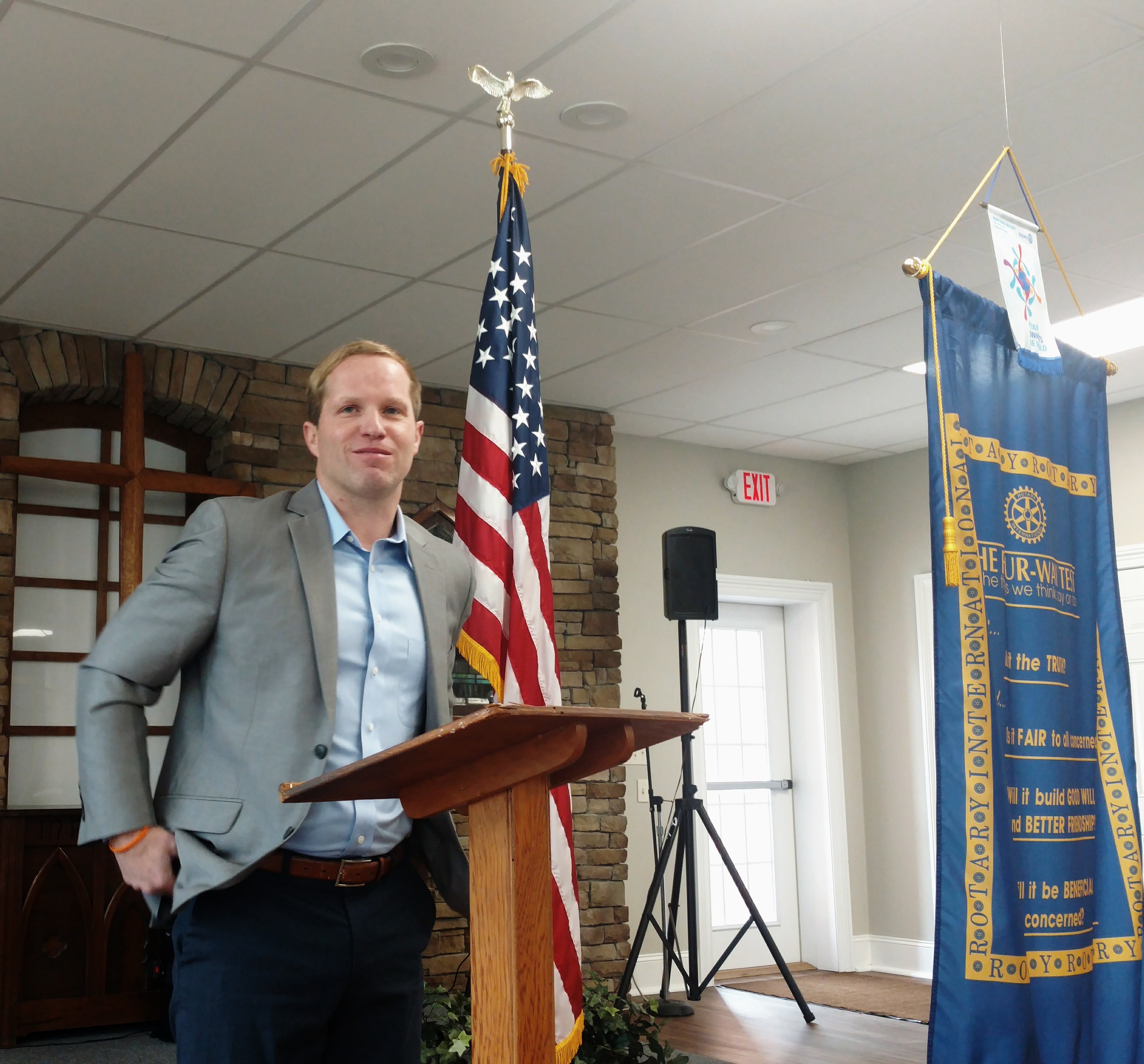 His brother, Cougar Head Coach Justin Price was scheduled to speak, but was unable to make it due to sickness. Assist. Coach Matt Price has been with the Campbell County Cougars for nine years.
Price spoke on the importance of football to the community and the lives of the young men enrolled in the program.  “We are so fortunate to have a great staff, with Justin leading the way and I am so blessed to be working this job and teaching at Campbell County,” Price said, adding that community support is what made the football program such a success. During his time at Campbell County, the football program has expanded from 30 student-athletes to around 80. Price discussed how he and other coaching staff teach the players to “let their light inside shine brighter than the light that shone on them,” along with other Biblical life lessons that would “serve them well in life.” “We try to teach them that they are not defined by that score board, but rather by what they have inside,” Price said.

He also announced that Campbell County was chosen to play on WVLT’s Rivalry Thursday. “It’s on a Thursday night, which is going to be at home and that is awesome for the community,” Price said, adding that the game will be broadcast throughout East Tennessee. Price said being chosen for this honor “spoke volumes of where our program is at and the support they see from the community.” “For our kids to have the opportunity to showcase their talents is remarkable,” Price said.

He also gave an update on his nephew Baby Jack, who was diagnosed with Leukemia last year at five months old. “He has been in remission since November and Lord willing he will get to come home in seven weeks and we thank God for that.”  Price said on behalf of his brother Justin and the rest of the family, he wanted to thank the community, the football players and the coaching staff for prayers, messages and all the kindness.” Every text message, every prayer, every bracelet; they felt all that. He still has a long way to go, but God has blessed him.”

Price began his coaching career in Anderson County High School where he was the defensive coordinator from 2007 to 2010. In 2016, he was selected as District Defensive Coordinator of the year. Matt Price has coached in East and West Tennessee All Star Games. He has been part of the coaching staff to make the Cougars part of the “winningest era in school history with 53 wins.”

Price played collegiate football at Maryville College where he graduated with a degree in mathematics in 2007. He has a Masters degree from Tennessee Tech and an Education Specialist Degree from Lincoln Memorial University. He is currently a coach and teacher at Campbell County High School.  (WLAF NEWS PUBLISHED -2/12/2020- 6AM)