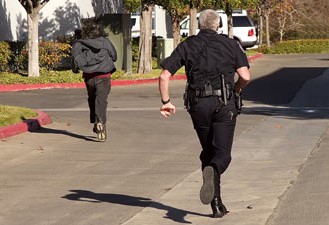 LAFOLLETTE, TN. (WLAF)- A LaFollette man was arrested on outstanding theft warrants after LaFollette Police officers found him hiding in an abandoned trailer, and he fled the scene.

According to the police report, on Tuesday afternoon, Aaron Bell of LaFollette, was found hiding in an abandoned trailer on Elm Street.
Officers had received a report of someone staying at the abandoned trailer and when they arrived they encountered Bell, who allegedly fled on foot.  Bell “must have crossed the creek” as he was apprehended a short rime later at Big Creek and taken into custody, according to police reports.

Bell, age 35, of College Hill Drive, was wanted on an outstanding warrant for theft in LaFollette, the report said. He was charged with auto burglary, theft of property under $1,000 and vandalism. He has a March 2 court date set, but has not yet been arraigned or had a bond set. (WLAF NEWS PUBLISHED -02/27/2020- 6AM)