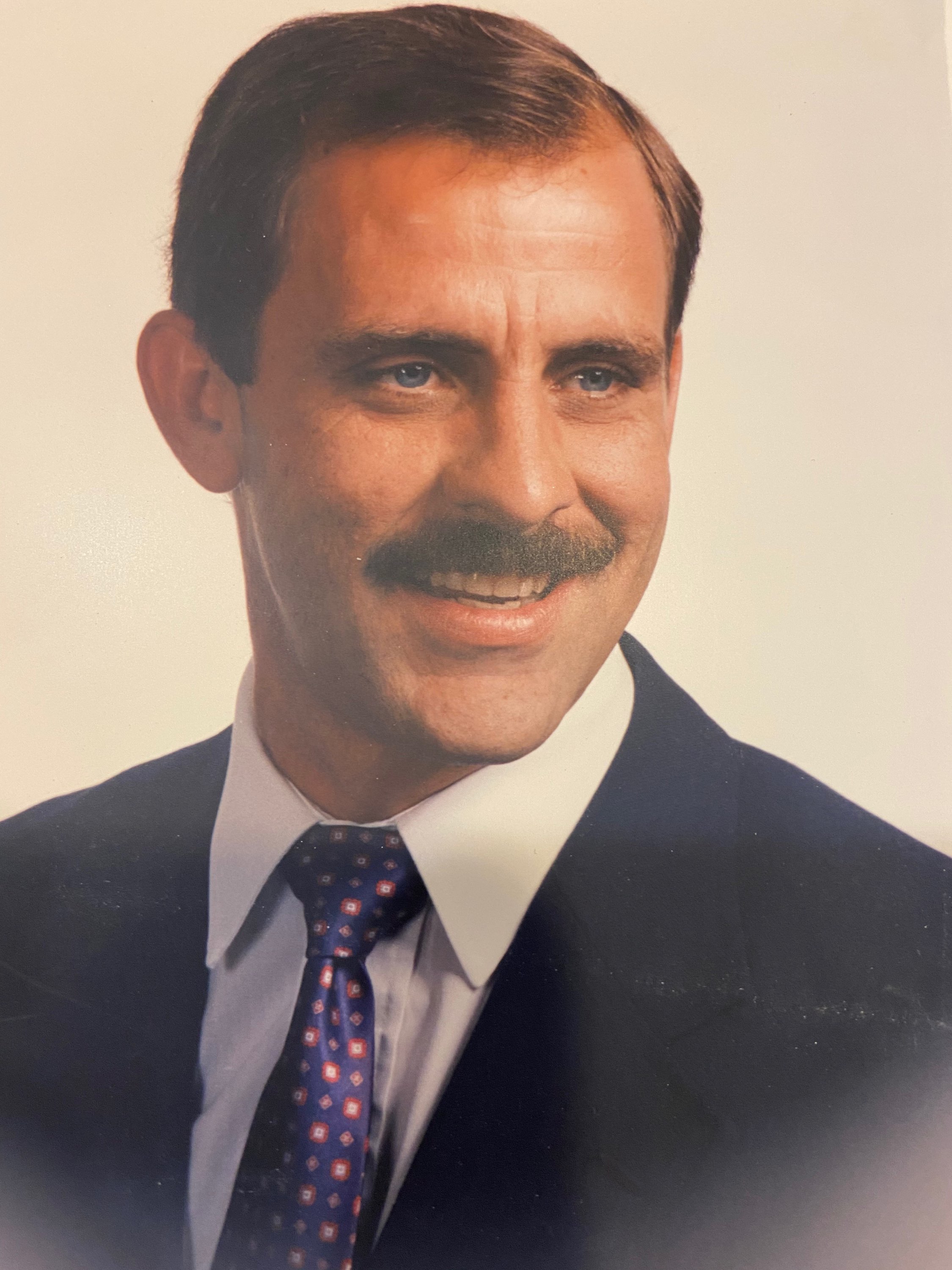 LAFOLLETTE, TN (WLAF) – It was 1968.  La Follette was our playground.  We walked, ran and even rode our bicycles all over town.  We were best pals.  Ned Russell and me.

When one of us was in trouble, the other most likely was as well.  In 8th grade, Jimmy Chadwell was subbing for our science teacher Jimmy Heatherly at the old La Follette Junior High in town.  Anytime there was a sub, Ned and I sat together making it a play day.  Once everyone had taken their seats, Chadwell said the first order of business was for me to stay put and for Ned to go to the other side of the room.  Our reputation wasn’t a secret; even to a first-time substitute teacher.

Ned died on Monday morning.  That afternoon a young boy on a bike collided with a pick-up truck over on East Kentucky Avenue.  I went to the scene of the wreck, and all I could think of was Ned and me, like this boy and the buddy he was riding with, riding up and down this very same street more than 50-years ago.

I don’t think I ever had any idea of just how many Ned Russell stories were floating around in my mind until this week.  The day Ned set a small trash can on fire in Kindergarten, him asking me how to spell his first name, James, in first grade and going to many Tennessee football games together are just a few of those thoughts that bring a smile and most times a laugh. 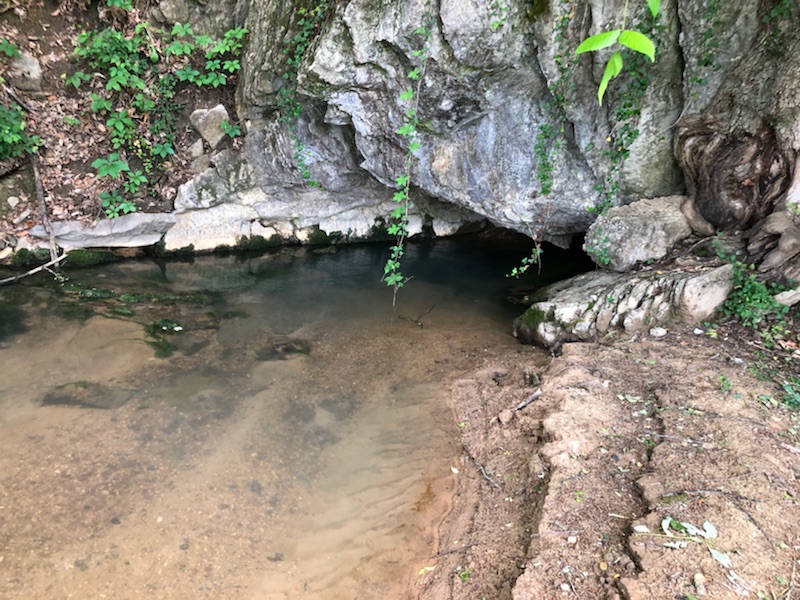 The creek, closest to the cave, and the cave haven’t changed much since 1961 though the landscape around the La Follette House (Glen Oaks) has changed dramatically.

We used to dam up the creek beside the La Follette House, his grandparents home.  The cave at the creek was where two six-year olds would smoke the cigarettes snuck from his dad CJ’s pack on a regular basis.  I was able to quit smoking.  Ned wasn’t.

Ned drew pencil sketches of trucks as far back as I can remember.  Whether it was a Jimmy (GMC) as he would say or a Mack or Kenworth, his sketches were spot on.  He could hear a truck pulling a grade and knew what brand it was.  Ned didn’t read music but could hear a song and then bang it out on the piano.

For about half of high school, Ned attended, against his will, McCallie, a prep school at Chattanooga.  At the end of September in 1972, we were going to the Tennessee-Auburn football game at Birmingham.  I ran up to his dorm room at McCallie to tell him we were there, and he said that he was in trouble and the principal wasn’t going to let him leave campus.  Instead of going to the car, we went to the office, and he pleaded his case.  The principal let him go, but he paid for it the next weekend. 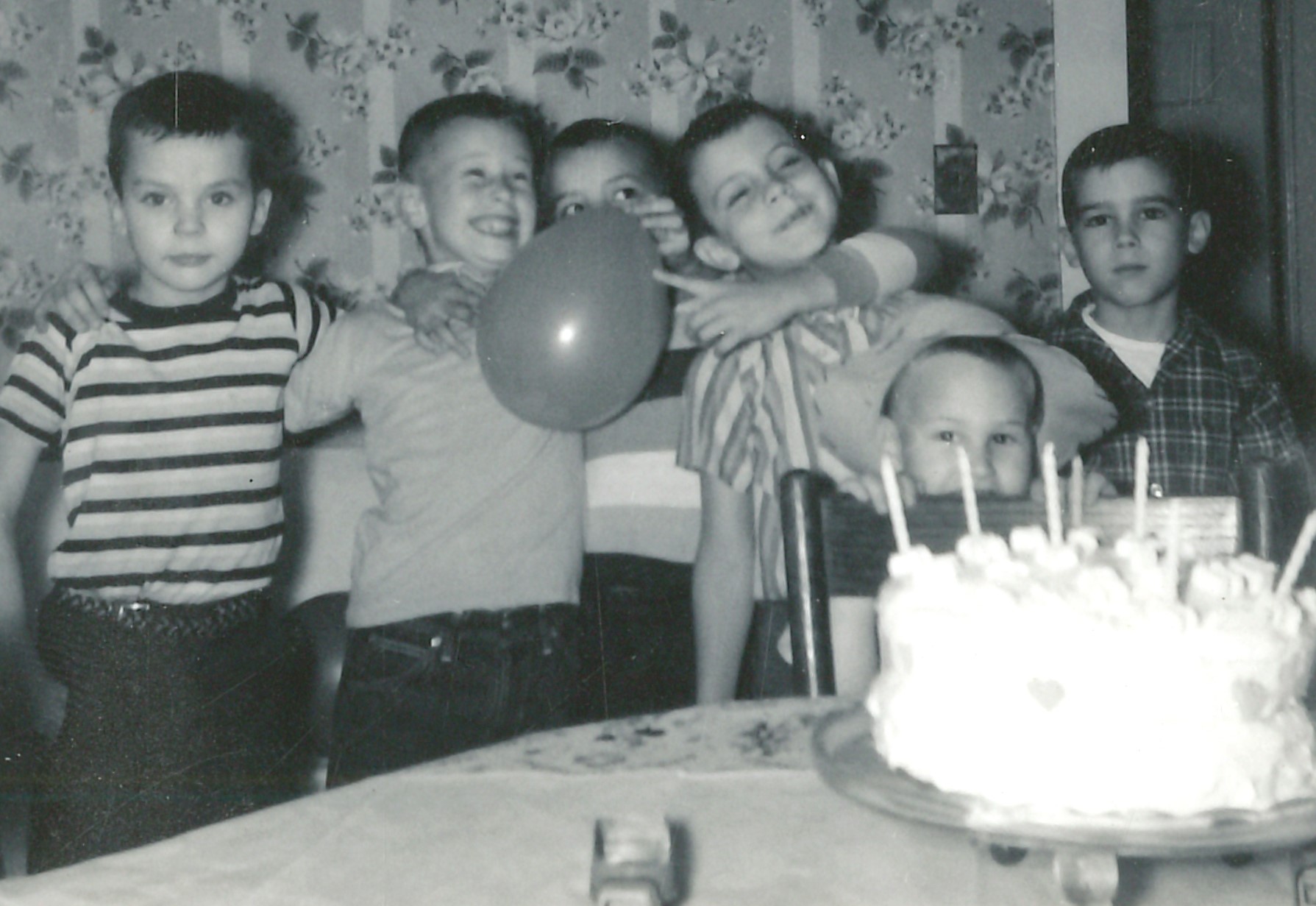 Left to right:  David Stanfield, me, Ronnie Kinder, Ned and Dennis Deavours with Daniel “Hoss” Freeman in the hat.  It was my 7th birthday party, the weekend President Kennedy was assassinated.

Ned grew up over on South 4th Street, second house over from East Central.  One Saturday night we were on the hill in an area that’s still wooded next to Central.  We had the bright idea of throwing rocks at cars.  If we hit a car, usually it hit its brakes and then kept going.  This one car we hit slammed on its brakes and made a hard right onto 4th Street.  We ran to Ned’s house.  His brother Mark asked why there were boys running run the yard.  We had no idea.  We also had no idea it was prom night at La Follette High School.

There were a few scrapes with the law along the way.  Ned drove his Morris-Minor up the sidewalk from La Follette High School one day and ended up getting a ticket.  Although he didn’t get caught driving that M-M backwards in town on another occasion.  But about that ticket.  Ned pulled a red wagon with a big jug full of pennies down to the police station on 1st Street to pay his fine.  He was told that he’d have to count out all those pennies, and he responded that all the ticket said was that he had to pay the fine.  Ned left the pennies and then left with the wagon.

Ned’s favorite color was black; black cars, cats, dogs and trucks.  He always had clever names for his animals like the dogs named Trouble and Nuisance.  He had a saying, fitting in most cases, “That guy is a self-appointed victim.”

There was a teacher in school that used to like to rough up Ned and me, mostly Ned.  One fall, the teacher called C.J. to have kerosene delivered.  It was October and cool nights had arrived.  C.J. told him that he’d have to talk to Ned about that, because Ned handled the kerosene deliveries now.  Ned finally gave in and delivered his kerosene up in November.

In the spring of our 8th grade year, we were riding bikes on a Friday night.  As we came over the hill on Ash Street at 8th Street, a car topped the hill behind us.  We tried to get out of the way, but Ned’s bike slid in a pile of gravels and he wrecked.  The car stopped, a window rolled down, and a guy asked “skin your ass, buddy?”  Then they drove off.

Second semester of freshman year, there was a student teacher in Paul Lynch’s Civics class.  Mr. Lynch introduced Mr. Bob Green to the class.  Mr. Green looked very familiar.  When class was over, Ned and I stopped by the desk to say hello to Mr. Green.  Then Ned asked, “Skin your ass, Mr. Green?” 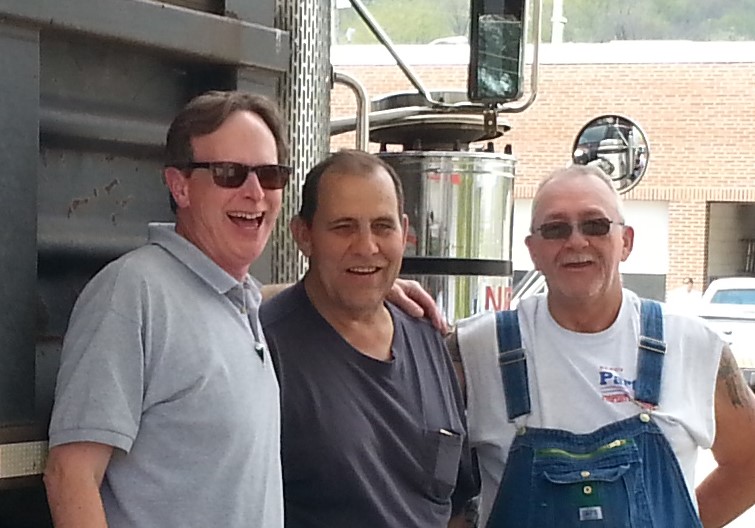 It was April 11, 2017, when we caught up at Chris Arnold’s Big Creek Market.  Me, Ned and childhood friend, David Wilson.

The last time I saw Ned was at Smith Hardware back in December.  His fun personality was in high gear as he sang “Sherman, Sherman, Sherman” to store owner Sherman Campbell making light of Sherman as in Sherman Clump from the Nutty Professor.  I was on the floor rolling up a 50-foot extension cord and Ned gets right there on the floor with me to help me roll up the cord.

When I saw the movie Stand by Me, nearly 35-years ago, I didn’t think a lot about the movie until the very end.  It was when one of the four 12-year old boys, now in their 30s, was killed.  One of the boys, at age 38, wrote about his friend who’d been killed; “Although I hadn’t seen him in more than ten years, I know I’ll miss him forever.  I never had any friends later on like the ones I had when I was twelve.  Jesus, does anyone?”  As soon as I heard those lines, I thought of Ned.

The world was so much more fun with you in it, pal.  Thanks for the memories.

23 Replies to “The Ned Russell stories live on”