Many folks were late starting their weekend plans on Friday afternoon.

The Cougars baseball opponent, Mc Creary Central from Kentucky, was late getting to Brown-Archer Field.  And First Responders had quite a task ahead.  A little before 5 pm, the call of an overturned 18-wheeler on America’s most traveled interstate, I-75, came in to E-911 Dispatch. 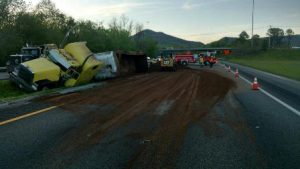 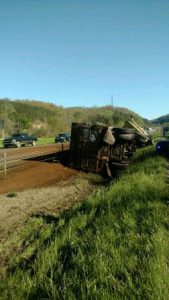 The big rig turned on its side about a hundred feet south of the south Caryville exit (MM 134) spilling out its load of fine metal asbestos.  I-75 was shutdown in both directions for a while and was not fully open until late Friday night.  Further complicating matters, there was an accident on Highway 116 (alternate route) around 5:30 pm at the Vasper underpass.  Three people were taken to the hospital from that mishap.  (WLAF NEWS PUBLISHED – 04/24/2018-6AM-PHOTOS COURTESY OF CARYVILLE FIRE CHIEF EDDIE HATMAKER)