Art has always been her passion, but life kept getting in the way of Marlow pursing her dream.

Angela’s upcoming show has had her spending more time in her studio on the second floor of the family home. She is still overwhelmed by her first booking, but looks forward to sharing her work.

From family obligations to self-doubt, Marlow’s painting ended up on the back burner of her life. While in school at the University of Toledo, she studied art, and that was her only formal training in painting.

The wall in Marlow’s studio showcases her diverse style of works.

As it turns out, it was all she needed. The self-taught artist, who in this electronic age turned to Google and YouTube for tutorials, has landed her first show at the Gallery of Light at Walden’s Landing in Pigeon Forge next month.

“It just doesn’t happen this way,” said Greg Marlow, Angela’s husband and biggest fan, next to the couple’s son Luke.

After watching his wife’s sacrifices through the years, Greg Marlow began researching how an artist books a show at a gallery. The end result for his wife was anything but text book. 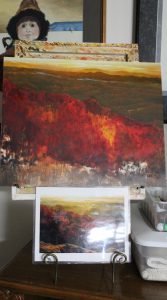 This work in progress shows the fiery reds seen in the fall in the Mountains of Appalachia.

An artist usually displays their work at small arts and crafts shows before a gallery will even offer a critique of the artist’s work, he said the research revealed.

Nevertheless, on a recent weekend, Greg and Angela took a weekend trip to Gatlinburg to visit local galleries. Armed with only a few samples, the Marlows visited the Gallery of Light and ended up leaving with Angela being the featured artist in June.

“You never expect the first gallery to give you a show,” Greg Marlow said. While he was elated, Angela Marlow said she found herself speechless.

This was her first attempt at a painting. It was also the entry that took Best in Show at the Louie Bluie Art Festival. It also holds a special place in the heart of the family because it is a painting of Tackett Creek, where her husband was raised.

Now with only days until her show opens, she is still somewhat awestruck at her turn of luck. Painting was something that she loved, but never thought would be of interest to anyone outside the family.

In fact, when she entered the Louie Bluie Art contest last fall, she had no interest in stopping by the festivities to see if her paintings had placed. Her husband was the one to go and pick up her ribbons for First Place and Best in Show.

“He has always been my best and biggest promoter,” Angela Marlow said of her husband. 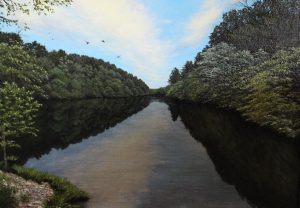 Marlow painted this depiction of Cove Lake in Caryville.

Her work will be featured at the Gallery of Light at Walden’s Landing in Pigeon Forge beginning June 3. The show will run through June 30 with Angela Marlow at the gallery on June 30 from 2 pm until 6 pm to sign her works.  (WLAF NEWS PUBLISHED – 05/29/2018-6AM)