On Monday, Campbell County Criminal Court Judge E. Shayne Sexton sentenced Shawna Neshea Henson of La Follette to nine (9) years confinement in the Tennessee Department of Correction.  On March 19, 2018, Henson pleaded guilty to Attempted Tampering with Evidence and Theft over $500. The two cases were investigated and prosecuted by Sgt. Noah Riggs of the La Follette Police Department and Lt. Detective John Long of the Campbell County Sheriff’s Office. Henson pleaded guilty to the Tampering with Evidence charge that involved the attempt to conceal or impair the availability of drug paraphernalia during an investigation by Riggs. Additionally, Henson pleaded guilty to Theft over $500 which involved the theft of a purse at Cedar Hill Baptist Church. 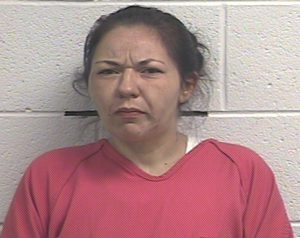 Shawna Neshea Henson of La Follette was sentenced to nine (9) years confinement in the Tennessee Department of Correction.

On October 19, 2016, Long investigated the theft of the purse at Cedar Hill Baptist Church. The victim, an 11-year-old juvenile, was attending the funeral of her sister when she discovered her purse was missing. The purse was located in the restroom with the contents of the purse missing. Through Long’s investigation, the missing items, which included the victim’s cell phone, gift cards, her school identification card, and her sister’s funeral program, were recovered in the possession of Henson at her home in La Follette. At sentencing, the State was represented by Assistant District Attorney Courtney Stanifer.  (WLAF NEWS PUBLISHED – 06/20/2018-1PM)