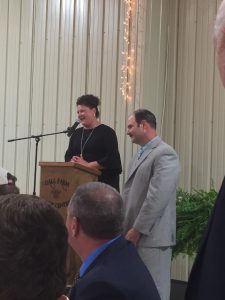 Billy Ball (R) looks on as his wife Jamie addresses the full-house audience at the 33rd Chamber of Commerce meeting.

Attendees at the banquet included members of the Campbell County Chamber of Commerce as well as some of the WLAF staff including me and my girlfriend Candace. 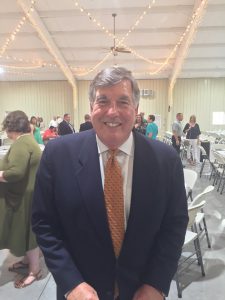 Bob Kesling, Voice of the Vols, was Thursday night’s keynote speaker.  He graciously honored his date to speak after a very sad day around the Vol Network and Big Orange Country following Wednesday night’s death of John Ward, long time revered “Voice of the Vols.” 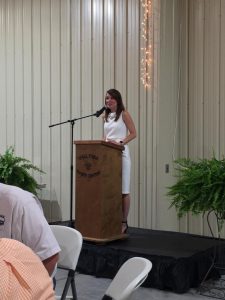 Christie Elkins, Director of the Chamber of Commerce, served as the evening’s master of ceremonies.

In closing, the entire WLAF staff congratulates the Ball Farm Event Center for being the “2018 Business of the Year” by the Campbell County Chamber of Commerce. We thank them for everything they do for this community. (WLAF NEWS PUBLISHED – 06/22/2018-6AM-PHOTOS BY DERRICK LEE ANDERSON)