“My dad didn’t like what my mom named me,” said Edward Petitt.  That’s how I became Bud.  And have been for almost 97-years.

It offends Bud when people look at him and say, “You’re too young looking to’ve been in World War II.”  Actually, an 18-year old Petitt enlisted about 16-months before the U-S became involved in the second World War. 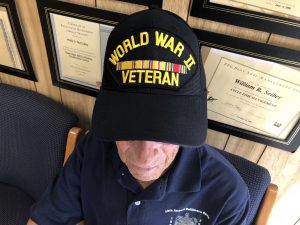 Petitt and another solider, from Habersham, each had a three-day pass on December 7, 1941, and were heading from their post at Fort Knox, Kentucky, to Tennessee when word of the attack on Pearl Harbor came over Bud’s car radio.  Also coming over the radio was the call for all military personnel to report immediately back to their unit.  Bud said seriously, “That’s when I went completely deaf.  My passenger did, too.”  That was followed by a laugh.  Petitt and his pal enjoyed their three-days at home before heading back to Fort Knox.

He spent five-years in the U-S Army with the 10th Armored Division and 20th Infantry and was a machine gun platoon sergeant.  His travels took him to England, Belgium, Germany, Luxembourg, and Normandy, France. 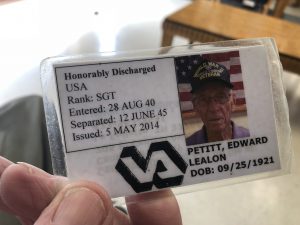 Petitt wears the cap and carries the card.  Just in case he has to prove to a doubter that he really was old enough to have been in World War II.

Bud, born in Anthras (near Eagan), was a member of the second graduating class at the new Wynn High School at Habersham in 1939.  Wynn High was at Cotula before the new school was built.

“When she got on the bus, I said YES.”  That’s when Petitt first laid eyes on Camilla Baltimore.  She and her family had moved to Westbourne from Fentress County.

Bud describes her as very beautiful and the most wonderful woman who ever lived.  He chuckles when he adds that he married her before she knew any better.   They were married for 71-years until her death about five years ago. 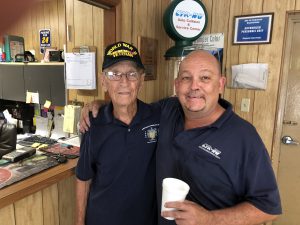 Bill Seiber (R) told Bud that he’d like to play golf with him.

Following the war, and a few jobs, Bud hired on at Chrysler in Detroit in 1949.  After eight years, he transferred to Chrysler in Delaware retiring in 1979.  That’s when he and Camilla returned to Campbell County and made their home east of La Follette.  He said, “When I retired.  I retired.  Nobody in East Tennessee can run fast enough to catch me to give me a job.”

Bud’s been playing golf for more than 50-years.  He and fellow World War II Veteran J.C. Paul play every week many times five days a week starting up at 9 am at the La Follette Country Club.  “He and I are always after each other trying to see how many bad things we can say about one another,” said Petitt.  When asked if they ever said anything good about each other, Bud said, “Not if we can help it.” 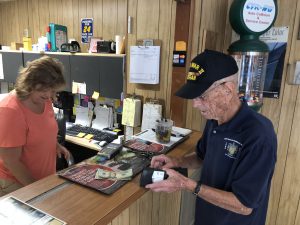 Before Bud could pay for his oil change on Monday at Lyk-Nu Body Shop, another customer stepped up and paid it.

The man his mother named Edward and his father wouldn’t call anything but Bud turns 97 on September 25.  He says, “With this longevity, I’ve really stuck it to Chrysler and Social Security.”