The Regional Planning Commission meeting started at 3:00PM on Monday in full swing with all in attendance but one.   Chairman Joe Bolinger read the resignation letter of Secretary Sherry Shope towards the beginning of the meeting. The letter was received on July 3rd, and Shope thanked the planning commission for the opportunities she was afforded during her time on the committee.

Firework sales within the City of La Follette were discussed again. Codes Officer Daniel Smith stated again that fireworks would bring an increase in tax revenue. Both tent and permanent structure sales were brought up as well as which zones would be allowed to sell. This topic was to be discussed at the workshop for the City Council set Monday evening.

Several board members for the Habitat for Humanity attended the meeting in hopes of an approval on a variance request involving property located at the intersection of South Cumberland Avenue and East Fir Street. 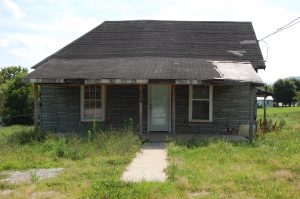 The “Green” house will go the way of the wrecking ball.

This would involve demolition of the “Green” house which Mark Hoskins voiced should be condemned anyway. David Stout of the Habitat for Humanities stated that it could be a win-win situation for the City.

The request passed as Mark Hoskins made the motion, and it was seconded by Mayor Mike Stanfield. (WLAF NEWS PUBLISHED – 07/31/2018-6AM-PHOTO BY LINDSEY HUTSON)

One Reply to “Green house to go. Fireworks sales back on the agenda.”