It was supper time.  A Campbell County mom and her two children stopped by Little Caesar’s Pizza in the Woodson Mall just before 7 pm Wednesday evening.     A person who was also getting a pizza at the same time tells WLAF News that she parked next to a car in the mall parking lot that had a young boy in the back seat and a little girl in the front seat.

The witness goes on to say that when she and the mother walked out of the pizza store, they heard the boy loudly shouting from the car.  The witness then says, “The mom said that’s one of my kids.”  The witness said, “The boy was screaming that he shot his sister, but he didn’t mean to do it.”

A call came in to La Follette’s E-911 Dispatch Center at 6:44 pm on Wednesday according to La Follette Police Chief Bill Roehl.  Roehl tells WLAF News, “This is a tragic situation that appears to be accidental.” 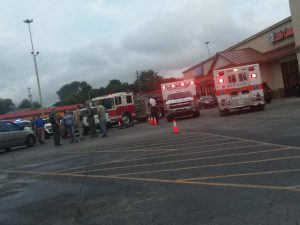 WLAF has learned that the children are students at Jacksboro Elementary School.  The nine-year old girl was scheduled to start 4th grade today and 5th grade for her 10-year old brother.

It was learned from one report that the father of the children keeps a gun in the console of his car, and that the mother drove his car to the mall.

The young girl was flown by a med chopper and taken to a Knoxville hospital.  Officials were notified that the girl passed away just before 10 pm Wednesday night.

A late night Facebook release from the La Follette Police Department details that “Investigators with the La Follette Police Department will be conferring with the Campbell County District Attorney’s Office about the incident tomorrow, August 9, 2018. As this investigation is still on-going further information will be forth-coming.”   (WLAF NEWS PUBLISHED – 08/09/2018-4AM-PHOTOS COURTESY OF WLAF’S JASON SHOCKLEY)