It’s not often the state promotes someone within a state park to park manager.   But Casey Hatmaker is a rare exception.  Since the summer of 1997, the Campbell County High Alum has been a part of Cove Lake State Park.  Whether it be as a seasonal employee 21-years ago or park ranger in the 2000s, Hatmaker has spent the balance of his life working at the park at Caryville. 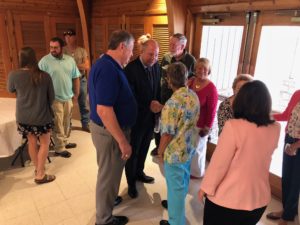 Brock Hill (above shaking hands) is the Deputy Commissioner for Tennessee’s Department of Environment and Conservation.  He publicly named Hatmaker as the park manager for Cove Lake State Park on Thursday morning at the park’s pavilion.  Hill points out that it’s always a major asset to a park to have a homegrown manager.  Given that, Casey’s ahead of the game. 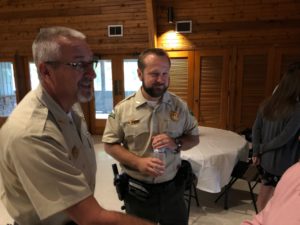 Hatmaker succeeds Kim Moore (above left) who after almost 30-years at Cove Lake Park has become the Area 5 Parks Manager.  Moore was on hand for Hatmaker’s ceremony and said, “Casey’s local.  He’s committed.  And I’m proud of him.”

Casey calls his local involvement his greatest asset.  He served for years as the liaison between the park and the Friends of Cove Lake.  He tells WLAF that, “I’m elated, but it hasn’t quite sunk in yet.”

Hatmaker served as interim park manager after Moore’s promotion in March.  He earned the position out of a strong field of candidates.  His first official day as park manager was back on July 1, 2018.  (WLAF NEWS PUBLISHED – 08/17/2018-6AM)