The Campbell County Cougars jumped on Cherokee early on Friday night at Red Valley only to let the home standing Chiefs back in the game – but that didn’t last long.

The Cougars scored on their opening drive of the game and season to go up 7 – 0.  The CCHS defense forced a turnover on the Cherokee’s first play of the game, and the Cougar offense quickly rang up a second score going on top 14 to nothing.  Head Coach Justin Price told the Voice of the Cougars, Les Martin, that, “I could not ask for a better start to a football season – opening with that long touchdown drive and getting a turnover on the first play on defense.  You can’t write it up any better than to go up 14 – 0 just like that.”

Cherokee responded with 14 first quarter points of its own to finish the quarter tied with Campbell at 14.  All-in-all, the Chiefs scored 21-straight points to take their first and only lead of the night at 21-14 in the second quarter.

The turning point of the game was when Landon Addington found Devlin Dukes on the far side of the west end zone for a touchdown with a handful of seconds left in the first half.  But it didn’t come without some angst. 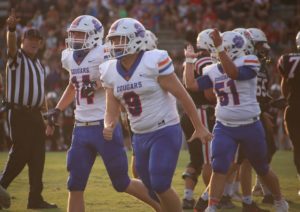 It was the Cougars final possession of the half down 21-14 after going dry for almost a quarter and a half.  On this drive, Campbell drove to a first and ten at the Cherokee 13-yard line with 56-seconds remaining in the first half.  Drew Jordan bullied his way for a four-yard gain.  Then Addington could not find an open receiver and was forced to run.  A Chief’s defender slung Addington for a loss back to the 11.  The senior signal caller hurried his team to the line, playing with no time outs, and spiked the ball.  All of a sudden, the Cougars were down to one play at the 11 with 11.9 seconds to go.  On fourth down, Addington caught Mikey Brown’s snap.  The blocking was holding up as he rolled to the near side, ran into traffic, reversed his field, and as he was nearly sacked lofted the ball to the far side of the end zone into the hands of Dukes.  The suspense did not end there.

Kicker Riley Wallace and his battery of holder Preston Bowman and long snapper Mikey Brown were set to knot the game and keep Campbell’s new found momentum.  After what seemed like minutes, the officials decided to put time back on the clock from 2.5 seconds to 5.8 seconds.  Wallace and the Cougars remained focused and Number 22 knocked through the PAT and evened the score at 21.  The Cougars never looked back.

Price called the play “big and ugly” but it allowed his team to head to half time with the momentum. 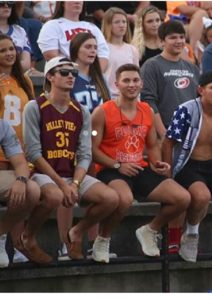 Cougar fans had lots to cheer about Friday night at Red Valley.

Campbell rang up 14 unanswered points in the third quarter to take a commanding 35 to 21 lead into the fourth quarter. Price credited his twin brother and defensive coordinator Matt and the other coaches for shoring things up on defense.  CCHS kept Cherokee off the scoreboard in the third quarter.

Cherokee carved into that lead to make it 35 to 28 with just under 8-minutes to play.   On the first play after the Chief’s  kick-off, the Cougars threw the knockout punch.  Landon Addington found Christian Shouse on the short side of the field in front of the Cougar bench.  The two yard toss was caught by Shouse at the 25.  He weaved through traffic to daylight on the far sideline and out ran the final three defenders to the end zone.  CCHS added another late touchdown to claim a 49 to 28 road win to open the 2018 season.

Coach Price, in his 8th season, said Addington has been smart with the football all season.  He describes Shouse as a physical and super-fast athlete who can jump.  He has great hands, too, Price said.

Addington was an impressive 22 of 29 through the air for 338 yards  with five touchdowns and no interceptions.  He was six for six to begin the night.  In fact, the Cougars were turnover-free Friday night.  Shouse, after a season away from football, made 10 catches for 247 yards and four TDs.

“Our kids didn’t quit.  They had a lotta fight in ’em,” said an excited Justin Price on WLAF’s TCAT Wrap-Up Show.  Price pointed out that the key was the fact his players were playing for each other. 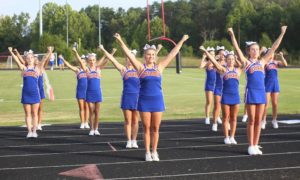 The CCHS cheerleaders cheered on the large contingent of Cougar fans on Friday night.

Aside from the thrill of the win, Price did say there were some areas for improvement.  He said, “We gotta get in better shape.”  Additionally, he says, “We gotta grow in that area – handling success, that is.”  Those comments come after his team quickly jumped out to a 14-point lead only to see Cherokee respond with 21 unanswered points.

David Wiseman recovered the fumble on the Cherokee’s opening possession, and Preston Bowman picked off an interception at a critical juncture.  Christian Shouse scored four touchdowns in his first start whle Drew Jordan add two TDs.  Devlin Dukes tallied the touchdown that turned the game’s momentum back to the Cougars.  Riley Wallace was perfect on PATs going seven-for-seven.

Price and his Cougars open the home schedule August 24 with the Davey Crockett Pioneers out of Jonesborough.  Crockett won at home last Friday over Seymour by a final of 21-7.