It was a big day Thursday for football, volleyball, golf, and soccer.  Lady Cougar Volleyball continues padding its record breaking start to the new season after defeating Powell  three sets to two sets Thursday at Brown Gym.  CCHS Senior Anna Cain had a multitude of kills for the Lady Cougars.  Campbell is 4 & 0 with a 3 & 0 district mark.  The Lady Cougars host Oak Ridge on Tuesday at 6 pm. 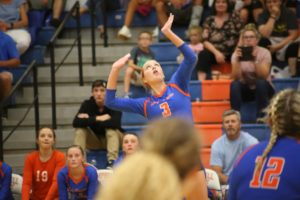 Anna Cain eyes the ball for the Lady Cougars

The Campbell High Golf Teams claimed wins at Deerfield Thursday afternoon.  The Cougars defeated Clinton 191 and Cumberland Gap 217 by a score of 159.  Carter Wells and Jack Leach finished with scores of 35 and 38 respectively.  The Lady Cougars won over Clinton 81 to 94 as Katey Wells shot a 38 and Mason Gallion a 43. 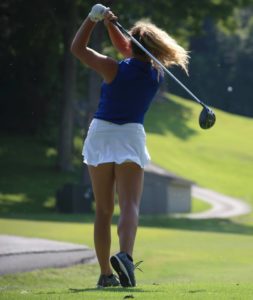 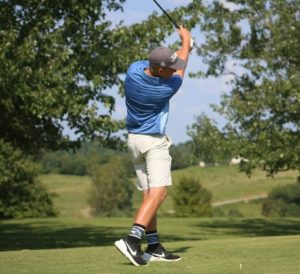 CCHS Soccer Coach Bryan Horton described his team’s efforts at Knoxville against Berean as a “great game.”  The Lady Cougars out shot the Lady Eagles by a lot, but Campbell’s shortcoming was missing so many close shots Horton adds.  Emily Mitchell tallied two goals while Keely Nelson and Sam Lasley had one each.  Karns visits CCHS on Tuesday at 6 pm.

It was homecoming Thursday evening at Gibson Field on the campus of Jacksboro Middle School.

TOP PHOTO:  Laney Woodson, escorted by Mason Shanks, was crowned as the 2018 JMS Homecoming Queen.  Laney is in the 8th grade. 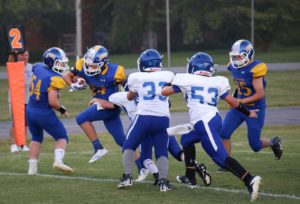 The Eagles ran all over Rutledge Thursday evening