Marlene Broadway wasn’t on the back dock at the La Follette Utilities Board Thursday morning asking for donations for someone in need.  She wasn’t there to see a crew off to assist an out-of-state utility during a natural disaster.  Broadway was there saying goodbye to co-workers and board members of LUB on her last day of a 31-year career.

“She’s been here almost as long as I’ve been around.  I was five,  in Kindergarten,  when she started here,” said Broadway’s youngest son, Brad Honeycutt.

LUB Board Member Jay Willoughby summed Broadway up in quick fashion as he reached for a donut at the going away party.  “Totally professional.  A winning personality that solved many problems on its own.  And,  she’s a pretty good farmer,” said Willoughby finishing with a laugh.

SEE some of the photos from Thursday’s fun time. 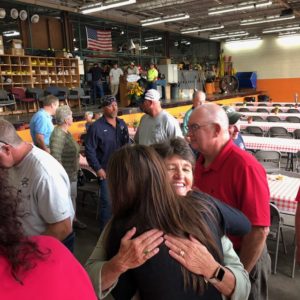 Hugs, handshakes, and kind words were the order of the day

Monday, July 6, 1987, is when Broadway started at LUB.  General Manager Kenny Baird emceed yesterday’s event saying he started at LUB while in college working in the summers before going full-time.  He left for a few years, and while he was away, every time he ran into Broadway, she would always tell him how much he was missed and that she hoped he would come back.  Baird said, “You can blame Marlene for me being back here.”

Regina Kennedy is now wearing Broadway’s big shoes as director of administrative services.  “We came as a set, and she is so going to be missed,” Kennedy said. She and Marlene worked  closely for many years.  Broadway is a “very kind, nice and generous person.  And she’s fair,” Kennedy said.  Now the new set is Kennedy and Kodi Dupuy with Dupuy taking over Kennedy’s duties.

Baird gives Broadway credit for many of the good things at LUB such as a pension plan and improved working schedule.   “She was a great co-worker for all of us, and somehow she maintained her sanity and integrity,” Baird said

Broadway spoke briefly to the large crowd thanking everyone and expressing her appreciation for them.  She laughed, and so did everyone else, when she said that part of her job description was doing what Baird didn’t want to do. 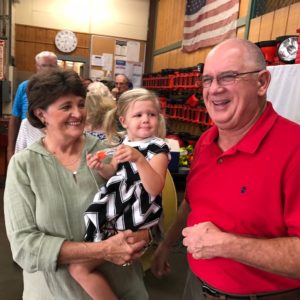 Baird joked Broadway always wanted one of those “going away” pocket knives.  And he delivered.  As she opened the knife box, he told her to look up as a tarp was taken off something covered in the back parking lot.  It was a pergola.  Baird told everyone that Broadway almost saw her big gift a few times as they tried to hide it around the LUB property until today.