Brenda Moses has worked with 10 chiefs of police, four mayors and several city administrators in her 42-year career at the La Follette Police Department.  But the count stops there, because Moses worked her final day last Friday.  It was a full team effort to put together a surprise going away party for Moses.  La Follette Chief of Police Bill Roehl went as far as driving Moses to Knoxville on Friday morning to a meeting to get her out of City Hall so the stage could be set for the party.  Moses put it all together pretty fast but was still somewhat surprised.

TOP PHOTO:  Moses is surrounded by those who serve or served with her over the years.

“We were really kids here (in those early years),” said retired law enforcement veteran John Vanover as he talked about his former co-worker.  He goes on to say that he was already on the LPD force when Moses started part-time as a high schooler in 1976.  Vanover describes Moses as a “true friend to all especially the City.”  He adds, “She is a great professional who is good to all.” 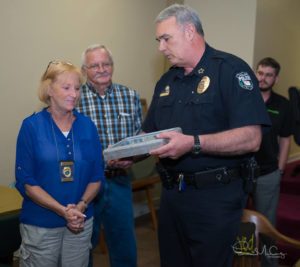 Moses (L) is presented a shadow box from Chief Roehl as Mayor Mike Stanfield and Moses son, Matt, look on.

Moses grew up at Red Ash and graduated from Campbell County High School in the spring of 1977 after starting at LPD through the school’s ICT program earlier in the fall of her senior year.

Lou Gorham was city administrator.  Earl Carroll was Chief of Police.  The mayor was Curt Alley.  Even current city council member Bill Archer was on the council in those days when Brenda hired on.   The new kid on the block became a full time employee in July 1977. 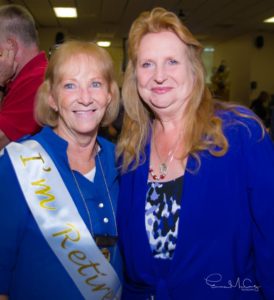 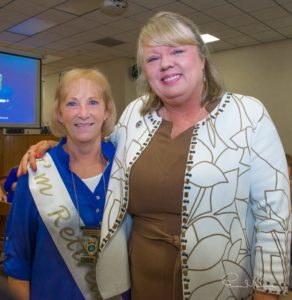 Moses and childhood friend Pam Evans-Beck (R) attended school together at Caryville.  Evans-Beck, with the TBI, worked closely with Moses and drove over from Nashville to share in Brenda’s special day.

Moses says there are so many memories, and most of the years have gone so fast.  A few, she adds, not so fast.  SEE Emma McCarty’s photo gallery HERE.

Current Chief of Police Bill Roehl called Friday’s celebration of Moses “well deserved.”  He noted that she will be sorely missed, because she’s been great help to all the chiefs and staff.

Moses wore many hats over her 42-years.  She started as a secretary and went to dispatch to supervisor and systems administrator.

When asked if she would do it all over again, Moses was quick to say “yes.”

A new chapter for Moses now begins as she starts a full time job with La Follette Utilities Board.  She was already working there part time.