The first raindrop that fell on veteran lawman Darryl Chapman’s windshield was about 30 miles into North Carolina on Saturday.  The rain kept falling through Tuesday.  Since Sunday, Chapman, a Fincastle resident, has been working as a contract security guard patrolling Wal-Mart and Sam’s Club stores in the storm stricken area of southeastern North Carolina.

And about that rain.  Chapman described that rain, at times, as powerful rainfall that came at the windshield as if two fire hoses were at full force.  Driving, even at a crawl, was nearly impossible in some of those more powerful storms.  He said that on the first day of his 138-mile ride to his post, he saw only four other cars on the interstate.

TOP PHOTO:  The Wednesday morning sunrise was the first sight of the sun in southeastern North Carolina in nearly a week.

One Wal-Mart, where he provided security, temporarily opened and ran all four of its Wal-Mart shifts at one time.  Even at that, there was no letting up of customers, constant check-outs and non-stop stocking of shelves.   “You know how it looks at the Jacksboro Wal-Mart on Christmas Eve?  That’s how it has looked every day since the Wal-Mart I’m working reopened full time,” Chapman said of the chaos left behind in Florence’s wake. 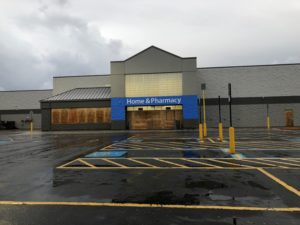 This is Chapman’s first post last Sunday morning at 7 am where the Walmart was not damaged.  He says there were strong winds, and the rain just lingered leaving a portion of the parking lot flooded.

In less than a week, Chapman has been to every major city in eastern North Carolina.  From Durham to Wilmington to Wilson to Raleigh to Washington to Greenville, he  made the rounds.  There are portable gas trucks at centralized locations that provide fuel to Chapman’s car and the cars of the others there offering hurricane relief.

Heartbreaking and heartwarming stories are popping up everywhere Chapman has been.  He called the North Carolinians “fighters who don’t give-up.” 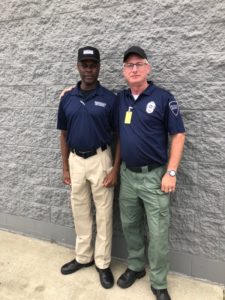 The resolve of some of the locals Chapman has met is off the chart like the 70-year old woman who rode her bicycle to the Wal-Mart.  She rode away with more than 10 bags of groceries strapped to the bike. As she was preparing her load, Chapman and his partner asked her if she needed any help.  She said “no, thank you” and gave them a warm smile.  The calloused ole cop Chapman can appear to be was most impressed,  and touched, by the woman’s resolve.

Some pleasant surprises for Chapman have been that cellphone service has been good and everyone he has come in contact with has been very appreciative of the efforts of the volunteers.  He praised FEMA (the Federal Emergency Management Agency) for being so well prepared. 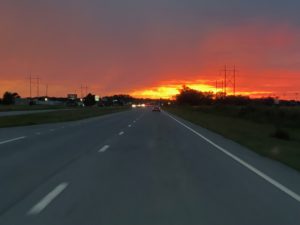 He pointed out  despite the improved conditions for some of the state, there are still areas of the southeastern interior that are still  struggling.  A map of that part of the state is dotted with red Xs meaning road closures.  Chapman outlined that miles and miles of interstate and other roads are still closed, and there are countless mud slides with many bridges under water.  The rain simply has nowhere to go.

“Several Wal-Marts have been so severely damaged that they will need to be completely rebuilt,” Chapman said.

Chapman described the assignment as long hours with little sleep.  His detail of a minimum of 14-hour days started on Sunday and ran through Wednesday.  He was able to have Thursday off, but he is back at it today.  He’s driven about 2,000 miles into and out of disaster stricken zones and during one stretch worked a 20-hour day, slept for three hours ahead of a 14-hour day. 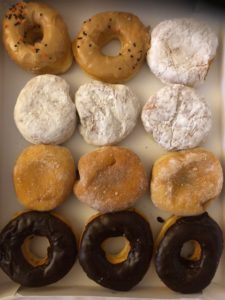 A cop can find donuts even while working on hurricane relief.

Today, Chapman said, is a day that he and his partner are on standby mode, and their duties may change.  He anticipates switching up to a search and rescue detail due to the new flooding.  So until the rain stops for an extended time, Chapman expects to be in North Carolina for an extended time. (WLAF NEWS PUBLISHED – 09/21/2018-6AM)