On Monday afternoon, members of the Campbell County Sheriff’s Department’s Special Weapons and Tactics Team executed a narcotics search warrant at 114 Island Ford Road, apartment 204, in Jacksboro.     That is where officials say Valzora May Thomaston lives, and that investigators conducted an investigation into Thomaston at the same address for selling illegal narcotics and prescription medication.

ABOVE PHOTO:  Officers converged on the apartment late Monday afternoon

In a release from the CCSD, it details that investigators conducted several undercover investigations as they purchased narcotics at this home prior to the execution of the search warrant. 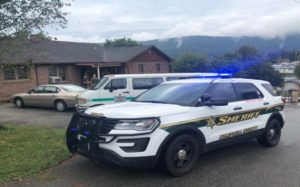 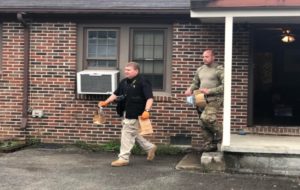 Officers are shown above carrying out evidence from Thomaston’s home.

The 44-year old Thomaston, who has been booked once into the county jail, was not arrested on Monday.  Her charge in the 2016 arrest was for filing a false report or bomb threat according to CCSD records.  (WLAF NEWS PUBLISHED – 09/25/2018-6AM-PHOTOS COURTESY OF THE CCSD)