Powell threw the first punch in Thursday night’s battle at Beaver Creek.    The Panthers went on top 7-0 with 26-seconds left in the opening quarter.  Campbell’s Christian Shouse scooped up the ensuing kick-off at the five yard line and took it to the house as the rain poured down.  Cougar Head Coach Justin Price said, “Shouse’s return was the spark the Cougars needed.”  The game was knotted at 7-7 at the end of the first quarter after Shouse headed toward the Cougars sideline where his blocking wall was set up.  He then cut back across the field near the 50 and left his closest defender 20-yards behind en-route to the west end zone at Panther Field.

Powell’s second quarter touchdown put the Panthers up 14 to 7 at the half.  As the rain ended, Campbell took the opening kick-off of the second-half promptly downfield for points.  A Landon Addington to Devlin Dukes 40-yard pass, catch and run was the highlight of the drive as Dukes stretched for the catch inside the five and landed at the one-yard line.  Drew Jordan pounded the ball into the end zone followed by Riley Wallace’s extra point to tie the game at 14. 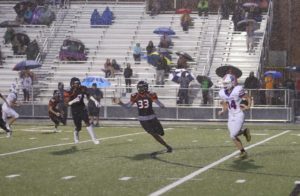 Cougar Christian Shouse was injured in the 2nd half of the game.  His status has not been released.

Powell’s next punch put the Panthers ahead 21 to 14 entering the fourth quarter.  Campbell countered with an 11-yard jaunt to the end zone by David Wiseman tying the game for the third time on the night.  This time it was 21-all.

Later in the fourth quarter, Powell took the lead again at 28 to 21.  The Cougars went to work on a promising drive that stalled inside Panther territory with 2:55 to play in the game.  That drive ended on downs at the Powell 44.  Powell answered with big plays to come away with an insurance score to take a 35 to 21 lead which stood up for the win. 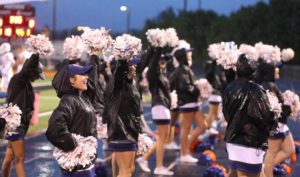 Cheers go up as the rain comes down.

A gutsy Landon Addington, nursing his injured left knee, started the game and led the Orange-n-Blue.  Price expressed his respect for Addington on the TCAT Postgame Report on WLAF saying “He is such a competitor who toughed it out tonight all the while taking some shots.”  Price added how proud he is of his team’s response to the recent adversity; Addington’s injury and the loss to Gibbs.  Shouse was shaken up in the second-half and missed most of the fourth quarter.  Price was not certain of his status.