With Cougar Football playing away on a rainy Thursday night, the hottest football ticket in Campbell County was on Friday for the annual Egg Bowl between Jacksboro and La Follette Middle Schools. This year the game was played on Jacksoro’s Gibson Field.   The Eagles started out strong as Peyton Ferguson returned the opening kickoff for a touchdown. The Eagles then recovered an onside kick and drove the ball downfield with Ferguson once again finding the end zone.  With the Eagles holding a two score lead, the Owls attempted a comeback.  Unfortunately for the boys in Orange and Black, Jacob Christy intercepted a Kainen Fernandez pass to end their drive. The Eagles took advantage.  Wwith 44 seconds remaining in the first-half, Eagle Will Lester powered his way into the end zone. The Eagles led 24-0 at the half. 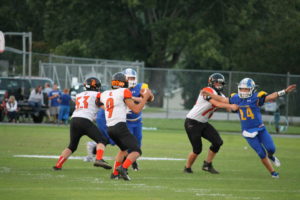 Kainen Fernandez sets to pass for the La Follette Owls

The second-half saw a bit of a defensive struggle at first until Lester once again punched his way into the end zone with 3:28 to go in the third quarter. A little over a minute later the Owls answered as Fernandez found Devon Jones on a deep route to bring the score to 30-6. However, for the Owls, Ferguson scored twice more for the 42-6 final margin of victory. 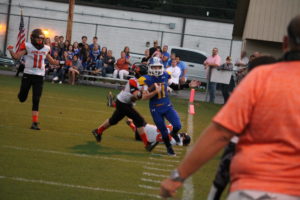 The Eagles not only get to keep the traveling Egg Bowl trophy for another year but they finish their second straight undefeated regular season. Jacksboro is riding a 16-game winning streak and has a first round bye in the TMSAA Playoffs.  (WLAF NEWS PUBLISHED – 10/01/2018-6AM-PHOTOS COURTESY OF DAVID GRAHAM)