On Tuesday afternoon, Terry’s Pharmacy donated more than a ton of food, literally, to the Food Life Services in Campbell County.    Terry’s has been collecting canned and non-perishable food items plus monetary contributions with the promise of matching each donation that was made. Owners of Terry’s Pharmacy, Rissa Pryse and Raewyn Snodderly, made good on that promise resulting in a ton-plus of food being donated in their Holiday Event #1. 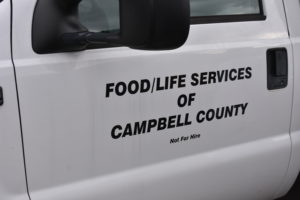 They want to thank everyone that donated food first and foremost. They also want to thank those within the pharmacy; Sue Standridge, a longtime employee, who worked feverishly towards this food drive, Justin Wilson, the pharmacist at the Jacksboro branch, who hauled the food and Shaun Lynch, the pharmacist in charge at the La Follette location.  The people of Campbell County thank Rissa and Raewyn for their hard work and generosity to the community!  Look for Holiday Event #2 in December.

It’s not too late to donate 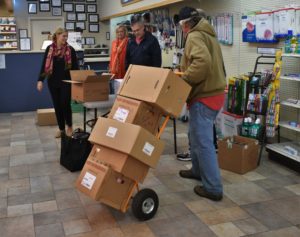 Donations continue to be accepted at both Terry’s Pharmacy locations.  Those food and dollar contributions go to the December 11 give-a-way.

The LaFollette Public Library is also helping. During the month of November late fees will be exchanged for canned food.  Patrons can have a $1 worth of fines forgiven with an item of nonperishable food. If less than $1 is owed, one item or can of food, will erase the fine.  At the end of the month, all food collected by the library will be donated to Open Arms Ministry to assist with its December distribution.

At your La Follette Food City and the rest of the FC chain, and continuing through Tuesday, November 27, $1, $3, and $5 scan-able cards are available at each Food City checkout.  Customers wishing to make a donation simply select the desired dollar amount and it is conveniently added to their order total.  100% of the proceeds benefit hunger relief and charitable organizations throughout the region.  Approximately 6 meals are provided for every dollar donated.  (WLAF PUBLISHED – 11/21/2018-6AM-PHOTOS COURTESY OF LINDSEY HUTSON)