His mom was a Lady Cougar basketball player, his dad was a Cougar football player and son Colby Brown is a senior at Campbell County High School.  However, there’s a twist.  Colby is also a Clinton Dragon.  The Dragons are arch-rivals of the Cougars in every sport except swimming.  Since the Cougars don’t have a swim team, Brown was allowed by TSSAA rules to swim at the nearest school that has a swim program.  That’s where Clinton comes in, and why Brown’s signing with the University of Montevallo (Alabama) took place at the Clinton Rec Center rather than at one of the high schools.

Mom Nicole, said, “He fell in love with swimming as a little boy and never looked back.”  Dad Jerry is grateful to Colby’s coach Jan Smith and the folks at Clinton for allowing him to participate and accepting him with open arms. 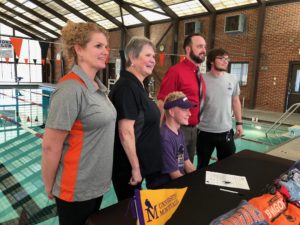 Jan Smith is Colby’s coach for the Clinton Dragons.  She said, “This has been a wonderful journey and adventure with Colby through middle school and high school.”  Smith describes her time coaching Colby as one of  her goals, challenges, successes and failures.  Nicole Patalano is the girls swim coach at Clinton while Andy Wagner coaches Colby with the Oak Ridge Atomics.  Zeke Rich is Colby’s coach with the Clinton Sharks.  The Atomics and Sharks are swim club teams.

Colby’s academic focus at the University of Montevallo will involve business administration and sports nutrition.  (WLAF NEWS PUBLISHED – 12/13/2018-6AM)