Maybe it’s only fitting that the daughter of Chad and Tina Lemarr Richardson has been a standout Lady Cougar in three different sports.  After all, the couple met in high school while members of the Campbell County High School track team.  Senior Lexus “Lexy” Richardson is a three-sport star in basketball, softball and volleyball.  “She’s kept us running for years and years, and I’m super excited for her,” said Lexy’s father Chad Richardson.   “Out of all of her sports, I don’t know how volleyball came around, but it did,” he said. 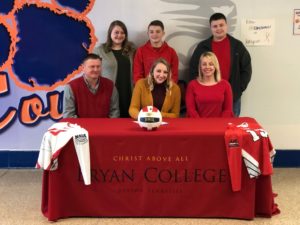 Bryan College, in Dayton, Tennessee, signed Lady Cougar Anna Cain to a volleyball scholarship a few weeks ago.  Lexy followed suit on Thursday afternoon by signing in the lobby at CCHS.   “She’ll do great, and I know she’ll be a success.  It’ll be fun being on campus with her, because I think that will help each of when a little homesickness comes around,”Cain said.

Cain pointed to Richardson’s volleyball IQ calling it “very good” noting she is an asset whether in the game or on the bench.