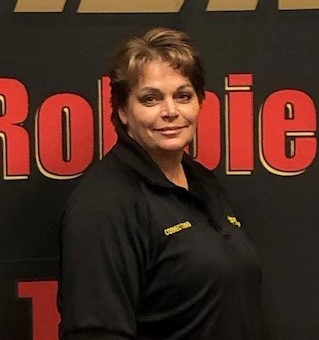 Kathy Walden is many things.

She is a mother, a grandmother, a believer in prayer and she is a supervisor at the Campbell County Jail.

“The public perception is that’s a man’s job,” Walden said of her job in corrections. “But that just makes me strive to do better.”

As with many employees at the jail, corrections wasn’t Walden’s first job. Her career has ranged from retail to the hospitality industry but her first day on the corrections job, Walden (pictured above) had found her “calling.”

Looking back on her initial days on the job, Walden laughed at her mixed emotions.

“I was scared to death to tell you the truth,” she said. “But I had a feeling this was my calling.”

Having been employed at the county jail for four years, Walden sees her job, as many of the officers do, as an avenue to help the inmates.

When a recent Eighth Judicial Recovery Court graduate named Walden as a person who inspired him, it validated her feelings from that first day.

“I thought maybe I am doing something right,” she said.

Even as Walden knows she can sometimes make a difference, the reality of where she works never leaves her mind. With nine officers per shift and up to 288 inmates at any given time, Walden acknowledged the odds weren’t always to the benefit of the staff.

On the days when the inmates are scheduled to appear in court the atmosphere is tense and the staff is busy. The tension can increase when an inmate gets bad news or worse- has their case rescheduled. “We have to deal with them when that happens,” she said. In one instance that meant managing an out of control inmate who “popped a sprinkler,” caused the lights to flash inducing a seizure in another inmate and created general chaos.

“You do what you have to to go home at end of the day,” she said. That means the watching out for one another and sometimes calling in help from the road deputies. “We have each other’s back,” she said. “I consider them all family. That’s what they are,” she said.

Walden also has the prayers of her mother.

“My mom said she prays for me more now than she ever has. And I will tell you, those prayers have brought me home many a time,” Walden said.

With no doubt in her mind that her family is behind her, that leaves Walden free to support her “family” at work.

“Crpl. Walden instills a sense of family at the jail,” said Sheriff Robbie Goins. “I appreciate that quality in her. When you have a presence like that, it just makes things run smoother.”

Walden is also appreciative of the opportunity the sheriff has provided not just her, but the other women at the department.

2 Replies to “Walden enjoys working with ‘family’ at the jail”