A car reported traveling at 62 miles per hour in a 45 MPH zone caught the attention of Campbell County Deputy John Minor late Friday night on Highway 116 near the Vasper underpass. 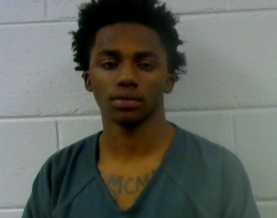 Minor outlined in his report that 19 year old Anthony Shervington of Clinton was headed toward Caryville when he was pulled over in a routine traffic stop at the Vasper recycling center.  Minor immediately noticed the strong smell of marijuana coming from Shervington’s 2008 Lexus Model IS as he made contact with him, the report said.

When Corporal Gary Jeffers came to assist Minor, Shervington  allegedly admitted to smoking marijuana in the car, according to the report.  The officers discovered a cigar rolled with what was believed to be marijuana along with 10-ounces of what appeared to be marijuana packaged equally in 10 clear bags.

Shervington told the officers  he drove from Clinton to Campbell County to buy marijuana, according to the report.  He didn’t know the address or who sold it to him.

Shervington was taken into custody and charged with speeding and possession of a schedule VI controlled substance.  (WLAF NEWS PUBLISHED – 01/29/2019-6AM)