The ETSBOA is made up of all paying band and orchestra directors in East Tennessee and is responsible for holding blind auditions each year to determine the best band and orchestra high school students in this region.  There is also an association for the middle and west divisions of Tennessee.

Fifth-year CCHS Band Director Adam Wright (in top photo) tells WLAF  he had 22 students audition this year.  Six of them won/placed in their auditions. This is the most musicians CCHS  ever sent to All-State East in the 44 years of the program, he said,  “This is a huge accomplishment for our band program,” Wright said. 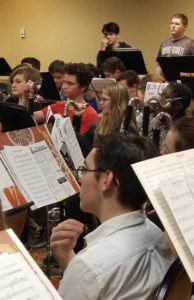 Ayers, Chavis, Leopin, Stevenson, Wallace and Williams are attending the clinic that is full of rehearsals comprised of the best musicians this division of the state has to offer.  The Cougar Six began rehearsals on Thursday and continue rehearsals today with a final rehearsal Saturday morning.   “That’s all prior to performing the extremely difficult, collegiate leveled music in concert for hundreds of audience members later Saturday afternoon,” Wright said.

The All-State East concert is Saturday at 1 pm at the Park Vista Hotel at Gatlinburg.  Wright said the concert is free to anyone to attend.  (WLAF NEWS PUBLISHED – 02/08/2019-6AM-PHOTO COURTESY OF DAVID GRAHAM)