The Ahh Spa opened last week with a menu of services that offers something for everyone.

Gayle Womble Cook, a Campbell County native who returned from Arizona to care for her parents, is passionate about her new business venture.

In 2015, Cook returned home when her mother died. For the next 11 months, she cared for her father. Upon his death, Cook knew she wanted to stay in her home county.

“I just wanted to give back to the community my parents loved,” she said.

But being a life coach and holistic healer (CORRECTION:  Cook is a Life Coach and Holistic Practitioner), Cook wasn’t sure what she would do in Campbell County.

TOP PHOTO:  The spa also offers lounge areas for patrons as they await their services.

“This came to me,” she said gesturing around the spa located in downtown LaFollette. With the initial idea of opening just a tanning salon, Cook’s plans grew. She soon realized that adding a float tank would be an added benefit for the business. Having a son with autism, Cook had seen the first hand results of a float tank.

“They help with oxygen flow, speed up the metabolism and increase circulation,” said Cook. 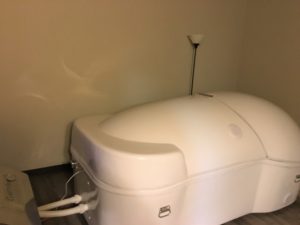 Soon the other ideas were flooding into Cook’s mind. Along with tanning, the float tank, facials, massages and a vibration plate, also used to increase circulation, Cook wanted to see the Ahh Spa as the place where people practice self- care and take part in the community.

In the 1,200 square foot studio space set aside for yoga and dance classes, Cook wants to host events and rent out the space.

Knowing that people in Campbell County do sometimes want spa services, Cook felt confident about the location and the business.

Taking the time to redesign and open the spa, Cook put thought into every aspect of the launch.

Housed in the space that was once the Powell Five and Dime and later a Wender’s Furniture Showroom, she painstakingly transformed the building. While utilizing the existing framework, Cook painted it in warm tones, incorporating new paint and walls as needed.

Topped off with Himalayan Salt lamps and LED lighting, the environment is calming, which is the feel Cook wanted.

While taking the time to design her spa, Cook also made sure to use all locally sourced products and labor.

The only items at the spa that weren’t locally purchased is the equipment.