“I had no idea about the event,” said Sandra Davenport (top photo) after the town, the school and her family all came out for her on Thursday night at Jellico High’s Lindsay Gym.  It was a night honoring the 54 year science teaching veteran who will be turning-in her test tubes and petri dishes come May.

“However, when I saw Cheer Coach Beth Hendrickson all dressed up and lots of former cheerleaders at the game, I became a little suspicious.  But then I passed it off,” said the lady the cheerleaders call Miss D.  It wasn’t until her daughter and then son showed up that she knew something was up.

As the daughter of a career military father, Sandra saw the world with stops in the US and overseas; she eventually even graduated high school in New Hampshire.  Her family was originally from Jellico and it is where she attended school through the third grade. 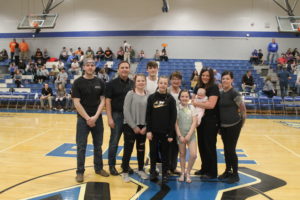 Many of Miss D’s family members were on hand

Her father retired when she graduated high school and moved the family back to Jellico.  She earned her degree at the then Cumberland College at Williamsburg and spent the fall of 1965 teaching in Dayton, Ohio.  She married, then returned to begin teaching at Jellico High School in early 1966 and is still there.

Somewhere along her 54 year teaching career and 32 years coaching the JHS cheerleaders, she stopped worrying about her students.  She said she realized that even if a student was not trying in class, she’d see them 10 years down the road, and they’d be doing just fine.  Davenport described her teaching as laying the ground work for them.  “I’m teaching students who have grandparents that I taught,” she added.

Miss D looks at the building of the new Jellico High School in 1996 as a major change, because she really enjoyed the former building.  “I like old things, familiar things.  Even though the new school is a great school, the old high school was more like home,” she said. 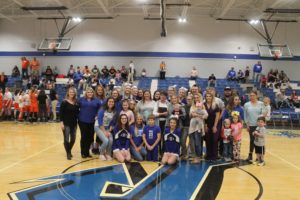 Lots of former students came out for Miss D.

If it is science, Davenport has likely taught it.  From biology to general science to chemistry to environmental science, she’s covered it.

She conveyed a sense of pride when she spoke about her students over these 54 years.  “I’m glad to see that they have become good citizens and contribute to the community.

One of her favorite student stories is when her car was in the shop and her husband had given her a car bearing Oklahoma tags to drive until her car was ready.  She was headed to school one morning and was pulled over by a Jellico police officer.  “As soon as he saw me, he started apologizing,” she said.  “I didn’t know it was you Mrs. Davenport, and he kept apologizing,” the former student exclaimed.  He did tell her that her license plate was expired. 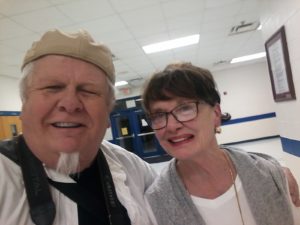 Even the photographer, David Graham, had to snap a selfie.

Miss D thought seriously about retiring a few years ago when many of her friends were.  But it was when her grandson Ethan Davenport decided to enroll at JHS as a freshman that kept her in the classroom.

So here it is four years later, and she and Ethan will go out together in May.  He to start college and her to start retirement.  (WLAF NEWS PUBLISHED – 02/11/2019-6AM-PHOTOS COURTESY OF DAVID GRAHAM)