La Follette Police Sgt. Noah Riggs reported when he topped the hill in the 400 block of West Walden Street, he saw Matt McCarty driving the car that passed by him.   Riggs knew immediately that McCarty had a habitual motor vehicle offender driver license status.  By the time Riggs could turn around, McCarty was out of sight, but he soon spotted him again as he drove down West Iron St. under the trestle at North Tennessee Ave.  The sergeant turned on his lights and siren as McCarty turned onto Aspen St. beside the La Follette Utilities  Board.  McCarty didn’t stop, instead turning north onto North Indiana Ave.  That was at 11:12 am on Thursday morning and the chase was on.   “Speeds reached 95 miles an hour by the time we passed the Big Rock Tavern, and the pursuit continued at a high rate of speed up Jellico Highway,” Riggs said.

TOP PHOTO:  McCarty drove for almost four miles on one good tire after hitting spike strips on I-75.

McCarty, of Earl Woodson Lane in La Follette, turned left onto Stinking Creek Road and soon slowed down as the passenger side door opened and a female attempted to exit the car according to Riggs report.  Riggs said that just about the time the woman’s feet were about to touch the pavement, the car sped back up.  The woman was able to get back inside the car though the door flopped open for a while until she could get it closed. 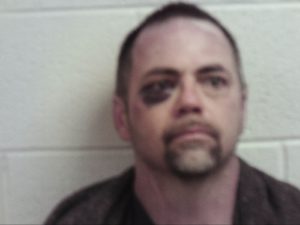 Matt McCarty (above) has been booked into the county jail 18 times.

Riggs followed the 46-year- old McCarty in the 2006 Chevy Impala he was driving  to I-75.  At the 144 interchange, McCarty headed south on the interstate.  By the time the chase reached Exit 141, Riggs had learned that McCarty didn’t have any outstanding warrants against him, and due to LPD policy, he cancelled his pursuit.  At that point, officers with the Tennessee Highway Patrol, Sheriff’s Office and Caryville Police continued the pursuit southbound. 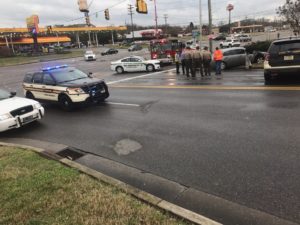 Estimates are that McCarty led police on a 52 mile chase at an average speed of 73 MPH.

Just past the Clinch River Bridge in Anderson County, Riggs said the THP laid down spike strips across I-75 at Mile Marker 125.  Up until then, the THP report outlined that speeds in the pursuit on the intestate reached speeds of 95 miles per hour.  McCarty drove over the strips blowing out three tires and was forced down to about 60-miles per hour but continued traveling before exiting at Exit 122, the Clinton-Norris Exit according to Riggs.

The THP report noted that McCarty struck another vehicle on Charles Seiver Boulevard (Highway 61) at Hillvale Road.  Riggs told WLAF that McCarty was attempting to turn up Hillvale toward the Walmart when he lost control of the Impala hitting a Chevy Tahoe with damage to a couple of police cruisers.

McCarty was taken into custody without further incident.  His female passenger, 22-year -old Savannah White of Oliver Springs was transported and released with minor injuries, according to the THP. 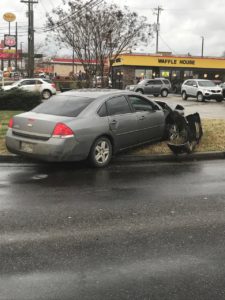 This was the 18th booking for McCarty into the Campbell County Jail dating back to when records began being stored on  computer in 1998.  He is facing a multitude of charges including driving under the influence (DUI), violation of habitual motor vehicle offender law, two counts felony evading arrest, possession of a schedule V controlled substance, driver’s to exercise due care, improper display of tags, improper passing, false imprisonment, two counts violation of the Tennesssee financial law, violation of implied consent law, violation of registration law, speeding 95 MPH in a 40 MPH zone,  eighth  offense driving on habitual motor vehicle offender status, ninth offense driving on revoked, reckless endangerment and aggravated assault.

Jail officials said McCarty remains housed in the county jail this morning without bond.  He is due in court on Thursday.  (WLAF NEWS PUBLISHED – 02/11/2019-6AM-PHOTOS COURTESY OF NOAH RIGGS)