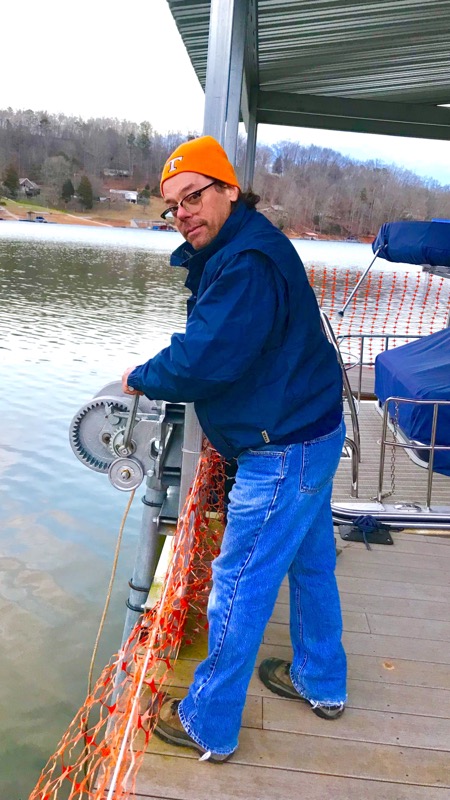 The level of Norris Lake is scheduled to go up four feet in two days.  Local dock care taker Don Marshall calls that, “a serious jump.”  Marshall told WLAF News  that the level Monday was 1, 009-feet, and it will jump to 1,013 by Wednesday.

TOP PHOTO:  On Monday afternoon, Don Marshall tends to one of the 10 docks he handles.

The anticipated rainfall Tuesday through Sunday, on top of already saturated ground, affects everyone in different ways.  For Marshall, it keeps him busier than usual for a February; especially this week. 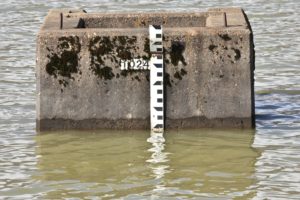 WLAF’s Charlie Hutson snapped this photo on Monday afternoon of the lake levels at the fish hatchery at Doaks Creek.

Since 2014, after retiring from the film industry in Hollywood, Marshall has lived at Springs Dock Cove on Norris Lake.  He was born in Knoxville and spent time on Norris Lake as a child and loved it, and he now lives on the lake full time.

Marshall said his list of the 10 docks he tends to almost daily grew quickly after he offered to help his next door neighbors.  Even though this is a two-man job, Marshall goes at it solo; pulling docks closer to shore when the lake is up and letting them out when the lake is low.  It’s about a four or five hour job to move all 10 docks, and he generally starts after lunch.  He does it in the afternoon to get a jump on the projected lake level for the next morning. 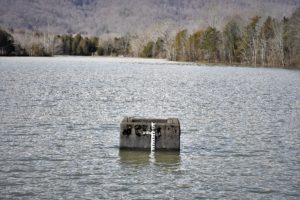 After a late start, he was out  Monday afternoon into the evening to shorten the cables of the docks.  A TVA app helps him to easily monitor the lake levels.

Marshall said, aside from all the rain and ever-changing lake levels, the real challenge is trying to keep the dock centered.  (WLAF NEWS PUBLISHED – 02/19/2019-6AM-PHOTO OF DON MARSHALL COURTESY OF KAREN MARSHALL-DOAKS CREEK PHOTOS ARE COURTESY OF WLAF’S CHARLIE HUTSON)