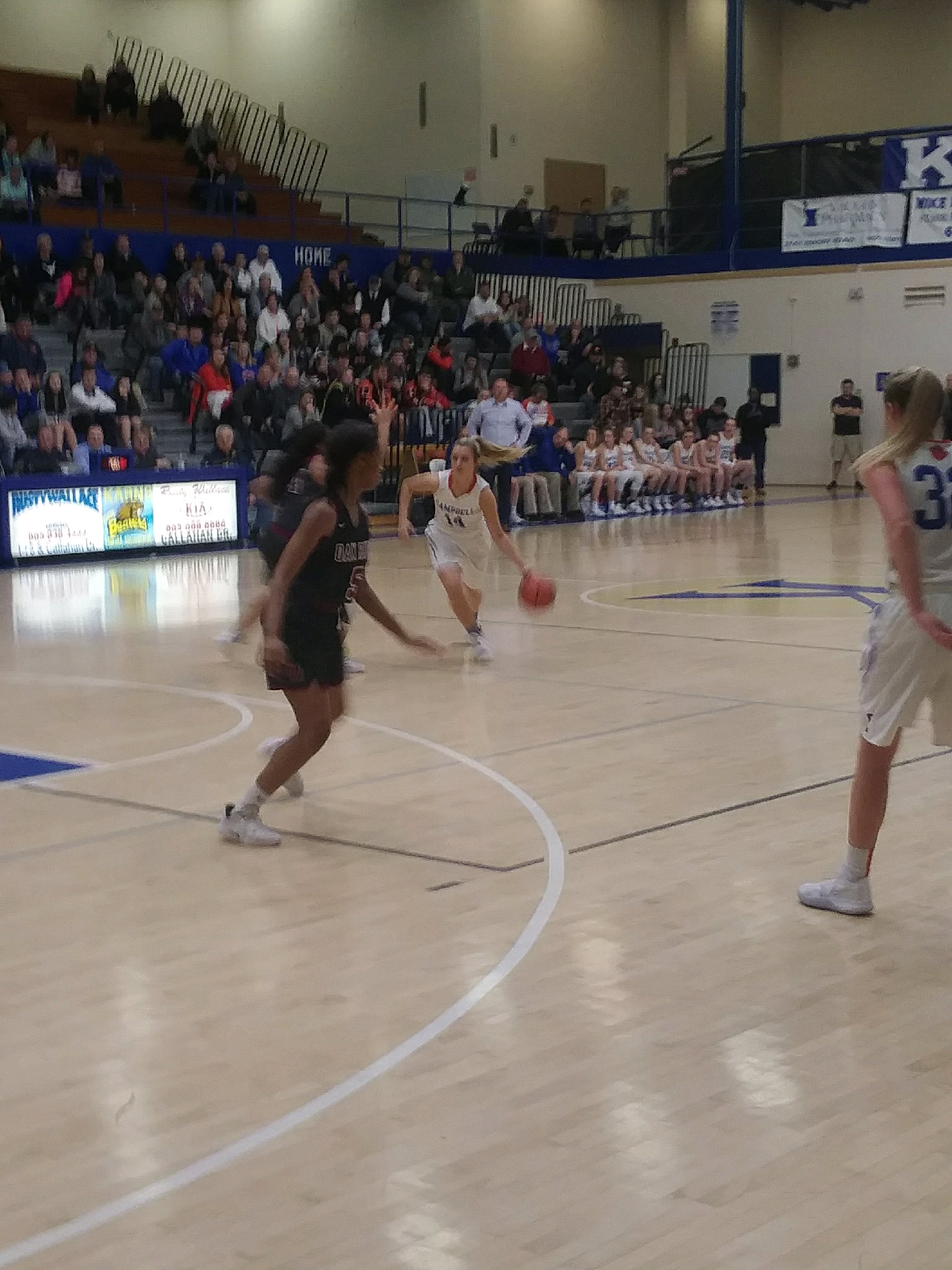 Campbell scored the first six points of Tuesday night’s district championship game with Oak Ridge at Karns.  While the Lady Wildcats took more than three minutes to get on the scoreboard.  It was quite a different game than in the last meeting on Prudden Court when OR won by 30.

The Lady Cougars held a 15 to 8 edge after one quarter.  Campbell carried a run of seven straight points from the first quarter into the second to take its largest lead of the first half at nine; 17 to 8.  Oak Ridge outscored the Lady Cougars 13 to 9 in the second quarter though it trailed 24 – 21 at the half.

Oak Ridge caught Campbell at 24 early in the second-half and it was a nip and tuck third quarter.  The Lady Wildcats took their first lead of the game at 33 to 31 with two minutes to go in the third.  Oak Ridge led 37 to 35 at the end of the quarter after outscoring the Lady Cougars 16 to 11.

The Lady Wildcats ended the third quarter by making two free throws and started the fourth quarter by scoring the first five points to take their largest lead at 42 to 35.  Campbell clawed back to make it 42 to 40.  Then it was 44 to 40 for more than four minutes.  Oak Ridge made its free throws and held on for the 47 to 40 win after a 10 to 5 final quarter.

The Lady Cougars could not buy a three-point shot.  They only made one shot beyond the arc all night despite many good looks.

Campbell Coach Brad Honeycutt said, “This game was decided on the boards tonight.  Oak Ridge ended up with a lot of second chance opportunities.”  The fifth year coach was most appreciative of the all-Campbell County crowd that attended the game on a very rainy night at Karns.

Honeycutt said, “We battled and played with a good attitude, but we struggled to make shots that we ordinarily make.  We make those shots, and it’s a different game.”

“One our goals was to host the region.  We accomplished that,” Honeycutt added.  “Getting to Murfreesboro is another goal, and we’re still on track for that to happen,” he said.

Campbell hosts Farragut Friday at 7 pm at Brown Gym in a Region 2 first round game.  Live coverage is provided by the WLAF – B &  M Tires Sports Network.

NUTS-n-BOLTS:  Campbell only mustered 23 points the rest of the way after jumping out to a 17 to 8 lead in the second quarter against the second ranked team in the state.  Oak Ridge’s largest lead was seven while CCHS once held a nine point advantage.  The Lady Cougars held OR star Jada Guinn to 18 points.  The Lady Cougars scored their fewest points in a game this season with Tuesday’s 40 point total.  Campbell County has held Oak Ridge to two of its three lowest point outputs of the season with 47 and 46 point games.  Oak Ridge has won 26-straight games.