Campbell County Sheriff’s Deputy Billy White is in the fight of his life.  But he’s not alone.  A literal army has joined him in his fight.  Saturday’s 3-on-3 team benefit basketball tournament and fan support provided plenty of evidence and encouragement.

CCSD Deputies helped organize the tournament, worked as volunteers and also played in the tourney.  Thirty teams competed from daylight until dark in a double-elimination tournament on John Brown Court at Campbell County High School.  A few teams even included some Cougar and Blue Devil legends along with lots of members of the law enforcement community.

CCSD Chief Deputy Jeremy Goins said, “It was amazing to see our community, once again, get behind a cause.”  The round ball fundraiser generated $2,100 from entries plus additional dollars from concessions and other donations.  Goins calls it “a complete success, because of the people that invested so much time to make this event happen.”

David Graham brings you the full interview with Chief Goins in the Thursday (02/27) Sports Report on WLAF-TV 12 at 7:30 pm. 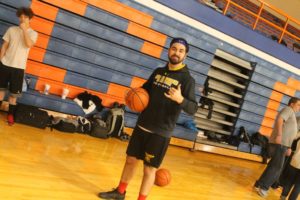 “Billy is our brother and we will always love and support him. I want to personally thank everyone for their continued support of Billy and his family,” said Chief Goins.  CLICK HERE to see Pat Pebley’s photo gallery.

White is battling leukemia, and his supporters have set a goal of $10,000 to raise to help him in his efforts.  So, far nearly half of that has been raised,according to Goins.  If you would like to donate, connect to  www.gofundme.com and search for Billy White.  (WLAF NEWS PUBLISHED – 02/25/2019-6AM-PHOTOS COURTESY OF DAVID GRAHAM)