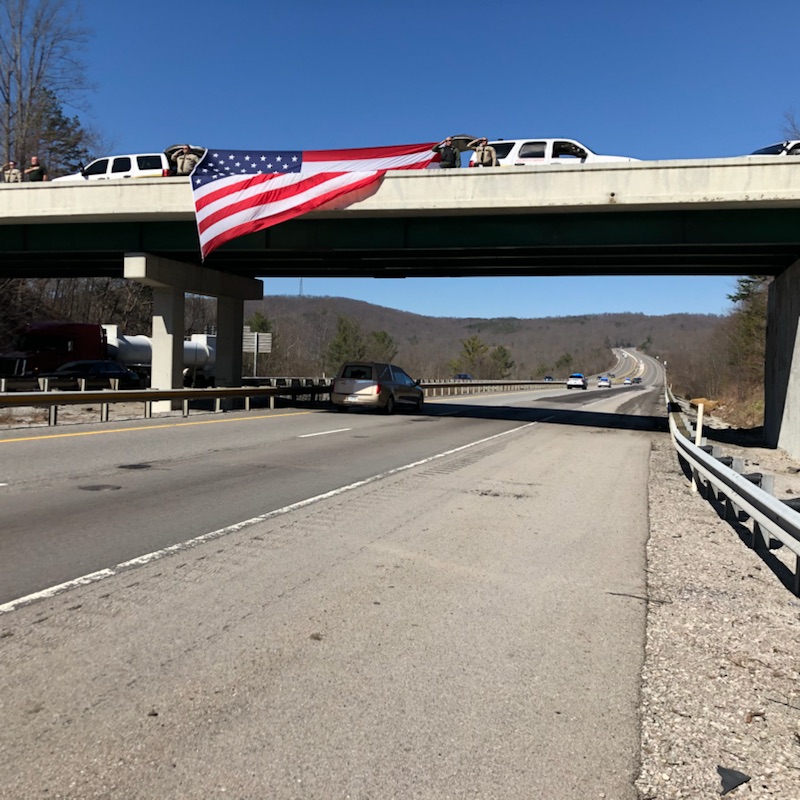 The motorcade carrying the body of a fallen Chattanooga Police Officer made its way through Campbell County in the noon hour on Wednesday.  Under a blue sky, with the wind whipping, the 25 or so vehicle escort of the body of CPD Officer Nicholas Galinger quickly rolled up I-75 in single-file in the passing lane.

TOP PHOTO:  The gold colored hearse carrying the body of fallen CPD Officer Nicholas Galinger passes under the Exit 144 Bridge on I-75 in Campbell County as Sheriff Robbie Goins and deputies saluting Galinger. 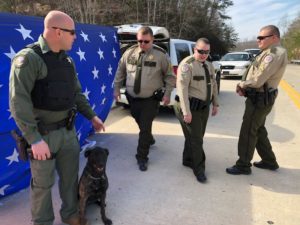 L-R David Wormsley, Daisy, Joe Hopson, Courtney Charles and Josh Jeffers are prepping prior to the arrival of the motorcade which was traveling through Lenoir City when this photo was taken.

Campbell County displayed a giant American flag over the bridge railing at Exit 144, Stinking Creek, and another flag flew on the bridge of the Rarity Mountain Exit at Mile Marker 156.  The wind along with the additional breeze of passing 18-wheelers made for a challenge for Campbell County Sheriff’s Deputies Courtney Charles, Joe Hopson, Josh Jeffers and David Wormsley.  Set up on the 144 bridge began around 10 am. 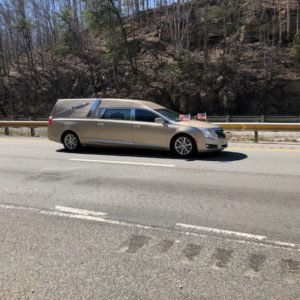 The Galinger motorcade passed by efficiently but quickly en route to Cincinnati.

Sheriff Robbie Goins was among the officers on the 144 bridge as the escort came through.  He said, “It was sad to see.  But it was also heartwarming to see all of my brothers and sisters in law enforcement showing such respect for a fallen brother.” 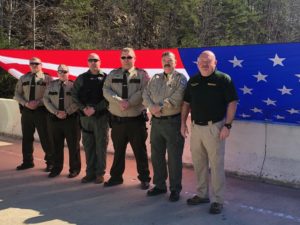 Prior to the arrival of the motorcade, Jerry Chadwell snapped and shares this photo of L-R Josh Jeffers, Courtney Charles, David Wormsley, Joe Hopson, Gary Cordell and Robbie Goins.

For this reporter, the event was most touching especially when the sheriff called all his officers to attention when the escort came into view.  However, the most stirring moments during the almost two-hour wait for the motorcade was hearing all the horns that were blown, in particular air horns from the big rigs, as vehicles passed by the big flag showing their salute of the Stars and Stripes.  I’m guesstimating that at least 100 horn were blown.

Galinger died over the weekend from injuries sustained in a hit and run.  The 38-year old officer, according to police reports, was checking an overflowing manhole cover Saturday night when he was hit.  His body, in a gold colored hearse, was taken back to his native Ohio for a Friday funeral and burial.  The escort traveled some 350 miles from Chattanooga to Cincinnati.  (WLAF NEWS PUBLISHED – 02/28/2019-6AM)