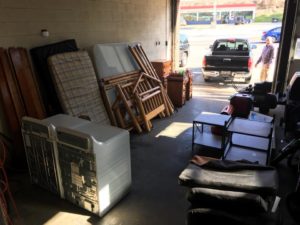 Over the past two days, detectives have recovered six truckloads (photos above) of stolen property including televisions, pressure washers, generators, washers, dryers along with bedroom and living room furniture taken during the burglaries. Efforts are being made to return this property to owners as soon as possible.

The property stolen from the storage facilities was scattered to several locations throughout the city and county.  Items were recovered at locations in Glade Springs and on Old Long Hollow Road, Iron Street and East Central Avenue.  The storage units involved in the incidents were Midway Storage, La Follette Storage and the storage units on Myers Lane in La Follette.

LPD’s Detective Unit informed the Campbell County Sheriff’s Office of this arrest.  They are currently investigating other storage unit burglaries from Volunteer Storage, where Green is also believed to be involved.  (WLAF NEWS PUBLISHED – 02/28/2019-5PM)