Former Campbell County Lady Cougar Sarah Cain has played two seasons of college basketball for the Bryan Lady Lions of Dayton, Tennessee.  And so far, it’s been quite a ride.     Cain and her Lady Lions have totaled 56 wins during her time wearing the red and gold all the while earning back-to-back trips to the NAIA National Tournament.

TOP PHOTO:  Cain has cut down the nets two-years in a row as a Bryan Lady Lion.

A 30-game winning streak, a national ranking as high as 12th and a third-straight Appalachian Athletic Conference championship highlighted the 2018-2019 campaign.  However, Bryan’s school-best season came to a close last Thursday at Sioux City, Iowa, in the NAIA Div. II Women’s Basketball National Championship Opening Round.  Even in the loss, Cain, a sophomore, had a memorable game scoring a dozen points. 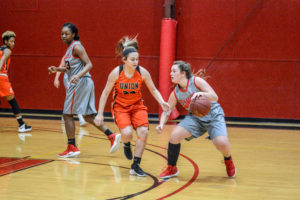 Cain said, “I never would have thought our season would be like this; 31 and 2 with a 30-game winning streak.  That’s so rare.”  She adds that it was an absolute blast to be a part of this journey with this group of girls.  Cain credits the bond the players created at the beginning of the season as a key to the team’s success.  She said, “I am so grateful for these relationships and even more proud of the women they are off the court.” 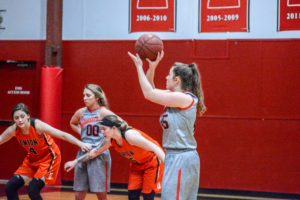