Campbell County Sheriff Robbie K. Goins tells WLAF that a known felon is in custody this morning after an adventurous apprehension in Norris Lake.  Suspicions by an alert Deputy Courtney Charles triggered a chain of events that led to the capture of 47-year old Charles E. Bondy, Jr. 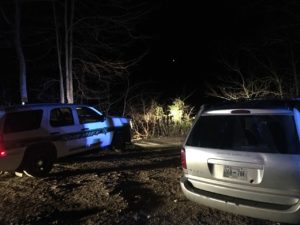 CCSD spokesperson Josh Vann details that just before 11 pm Tuesday night Charles spotted a suspicious van, with Union County, Tennessee, tags, (in photo above) parked at the end of Lake Road at Vasper.  She soon learned that one of the two people inside the van was Bondy, a known felon, who fled on foot.  Charles chased Bondy down the lake bank getting her hands on him, but he drug her until breaking free and escaping into the water. 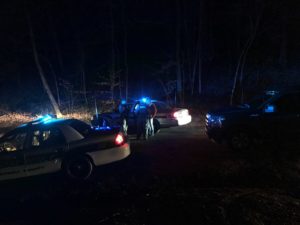 Other deputies began arriving including Deputy John Minor who, about an hour into the pursuit, located Bondy visually.  The felon was in the lake holding on to a root. 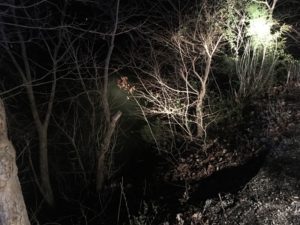 Deputies were lowered over the bank by rope to affect the arrest and began giving verbal commands to a non-complying Bondy.  Members of the La Follette Rescue Squad assisted deputies in getting Bondy back to land where he was taken into custody.

Bondy was transported to the La Follette Medical Center.  At this hour, officials are waiting for Bondy to be medically cleared before being booked into the Campbell County Jail.  (WLAF NEWS PUBLISHED – 03/13/2019-3:30AM-PHOTOS COURTESY OF THE CCSD)