The La Follette City Council recently made a lifesaving purchase for a group of lifesavers, the La Follette Fire Department.  LFD Chief Charles Eldridge said, “Council is really coming through for its fire department.”

Wednesday, under a bright, sunny sky, members of La Follette’s Fire Department, Council and Administration publicly broke out their new air packs (and posed for the photo above).  The chief exclaimed, “There’s nothing out there that’s any better than these Scott air packs.”

Until yesterday, Eldridge and previous chiefs had piecemealed air packs for all their firefighters.  Now, the entire LFD has 21 new air packs and 21 extra air bottles.  One for every firefighter.  That’s a first.  Gone is that air pack from 2001, and the other old, and very heavy, air packs are gone, too. 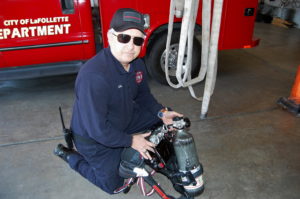 Veteran firefighter Johnny Seal holds one of the new air bottles.  He says it’s about 10-12 pounds lighter than the old bottles.  In the photo below, Seal shows off the new helmet cameras that comes with the masks. 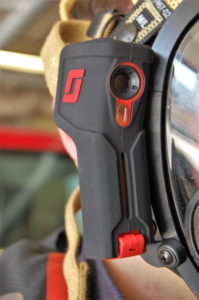 Seal points to a critical improvement of having the new packs; far quicker air bottle swaps.  He said, “Before, it took at least a minute, sometimes as much as two minutes, to change out an empty air bottle.  Now it’s 10 to 15 seconds.  That’s critical.” 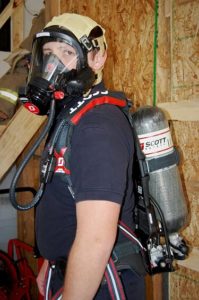 Aside from quicker bottle exchange time and a lighter pack, there are several other major features that aid lifesaving for firefighters and victims.  The air pack cameras, on the masks, provide thermal imaging.  Eldridge says the cam allows you to see a wall that contains fire on its inside, that has not broken to its outside yet, and know there is fire.  It also allows you to see a burned out floor through smoke.  The chief notes that the masks have voice amplifiers so firefighters will not have to shout to communicate. 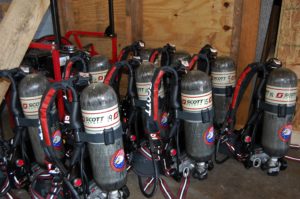 The air packs, with a price tag of $150,000, are the best on the market.  LFD Firefighter Tristan Nelson said, “These are so new.  They just came off the line and are not even a month old.”

Council has more lifesaving items in store for its fire department.  On the way is a new fire truck.  Not far behind are new sets of bunker gear aka turnout gear.  A new rescue unit, to replace the current 22-year old one, online in-unit computers, new equipment to meet rope rescue and repelling requirements and a new training tower are in the works. (WLAF NEWS PUBLISHED – 03/21/2019-6AM-PHOTOS COURTESY OF WLAF’S CHARLIE HUTSON)