About an hour before daybreak on this Friday morning, the La Follette Police Department’s Drug Unit and Special Response Team  struck at a home on the west end of town. 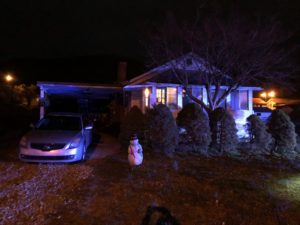 A pre dawn raid was carried out at this home at the corner of West Central Avenue and North 27th Street.

Officers swarmed the home at 1102 West Central Avenue that sits at the corner of Central and North 23rd Street.  One members of the unit said, “It’s prescrption pills being sold illegally at this house is why we’re here.”