Around 1 pm Saturday, crews from the Campbell County Rural Fire Service were dispatched to Whitman Hollow Lane on the report of a house on fire. TOP PHOTO:  A brush fire close to four-acres in size burned near this home.  The home was not touched. 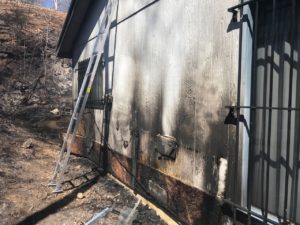 This home on Whitman Hollow Lane suffered some damage.

On Sunday at 3 pm, firefighters with the CCRFS were called to another brush fire.  This fire, on Mill Road off Victory,  was quite large, according to CCRFS Assistant Chief Daniel Lawson and was threatening a house.  Upon arrival, crews found one house threatened and contained the fire to around four-acres with no damage to the house or any other structures.

Lawson offers a reminder that a burn permit is required this time of year and to never leave a fire unattended. (WLAF NEWS PUBLISHED – 03/25/2019-6AM-PHOTOS COURTESY OF CCRFS ASSISTANT CHIEF DANIEL LAWSON)