A Thursday afternoon call to 911 reporting a car hit a guard rail on Stinking Creek Road and kept on driving led to two arrests on several charges including possession of meth.    Campbell County Sheriff’s Deputy Corey Laxton spotted a parked 2010 Infiniti G37, in the noon hour, on the side of the road at 1559 Stinking Creek Road.

The driver of the car was identified as 34-year- old Brandon Lee King of Duff and his lone passenger was 36-year- old Kendra Coline Marlowe of Jellico. 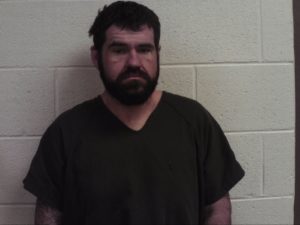 King was found attempting to repair the damage on the front passenger side of the car where it was damaged after allegedly hitting the guard rail, Laxton’s report said. King told the officer he had  been released from prison earlier in the year on a felony theft charge.

Marlowe appeared to be unconscious in the front passenger seat, according to the deputy.  She was just “tired,” according to King. 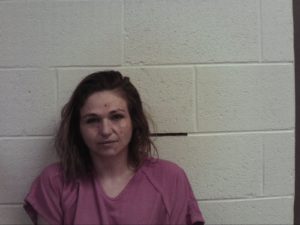 Laxton checked the other side of the car for damage as the driver’s door remained open.  He again asked King if Marlowe was injured.  King then began to reach inside the Infiniti, and as he did, Laxton allegedly saw a handgun laying in the driver’s seat halfway covered by a sweatshirt.  The deputy asked King to step back and then patted him down for more weapons.  King denied having anymore weapons and asked Laxton to not charge him for having the gun since he was a felon, the report said.

Prior to being frisked, King said there may be a needle and several nerve pills in his pockets.  Laxton did discover pills believed to be schedule IV controlled substances. King was then seated in the backseat of Laxton’s CCSD cruiser.

Laxton was still concerned about Marlowe, who had remained unconsciousness.  He was eventually able to wake her.  After struggling to get out of the car, Laxton had Marlowe sit on the ground next to the Infiniti.

An ambulance from Campbell County EMS was called to check on Marlowe; she refused medical treatment.

Based on the report, Marlow told Laxton that she had taken heroine when she was questioned about her drug use.

After a search of the car, approximately nine grams of meth were found, the report said. Both King and Marlowe denied the meth belonged to them.