Wayne Heatherly was many things over the course of his 70 years.
The American Flag that flew high over West Central Ave. as the sun shined down late Sunday afternoon honored one of the things Heatherly was- a war hero.  The other, a career man with the railroad, was honored by the outpouring of former CSX co-workers who came by Martin Wilson Funeral Home to express their condolences. 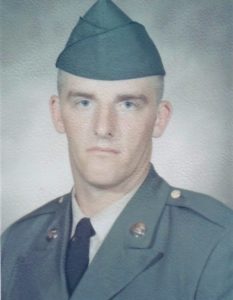 “Waving that flag is the last thing we could do for Wayne,” La Follette Mayor Mike Stanfield said. The mayor recalled his days in school with Heatherly laughing at how they played dodge ball in Fred Hatmaker’s PE Class.

The 70-year- old Heatherly, a US Army veteran who served in the Viet Nam War, will be laid to rest this morning at 11 am at Powell Valley Cemetery.  Military honors will be presented by the Campbell County Honor Guard.  (WLAF NEWS PUBLISHED – 04/01/2019-6AM)