There was a time, not so long ago, when the Campbell County Cancer Association was down to $400 in its checking account, according to CCCA Director Clarence Lowe.  See all of Charlie Hutson’s photos HERE.   However, 15 years ago, CCCA volunteer David Chapman suggested  having a telethon on WLAF-TV 12.  Since then the community has responded.  It responded again Saturday during the association’s annual telethon/radiothon over WLAF.  As of this morning, a shade more than $40,000 ($40,035.99) had been raised. 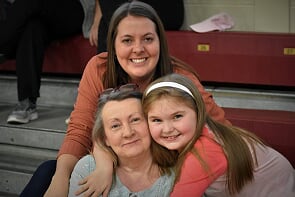 Family fun for the folks above, and it was an evening of work for John Green (L) and Clarence Lowe (below). 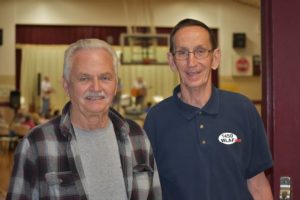 Lowe said more dollars will roll in over the next few weeks.  The CCCA invested $65,000 last year in the lives of Campbell County cancer patients, he said.  Except for some minor business expenses, 95 percent of all the money raised goes directly to help the patients.