That’s my girl!  That’s my man!  You saved my life!That was the emotional exchange between Caryville Mayor and firefighter Bobby Stooksbury and Cathy Chercourt (hugging in top photo) at a Friday reunion for the two coupled with an award ceremony for Stooksbury. 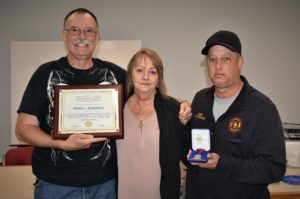 L-R Stooksbury, Chercourt and Caryville Fire Chief Eddie Hatmaker.  Hatmaker did a masterful job of keeping the ceremony a secret.

Smoke was showing when Stooksbury arrived.  He went inside the home, and through thick smoke, located Chercourt in the living room.  He was able to get her to the front door just as Caryville Police Officer James McCall made it to the scene and helped Stooksbury carry her out into the yard.  Chercourt was suffering from smoke inhalation. 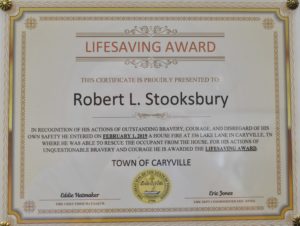 Stooksbury, a 45- year veteran of the fire department, was awarded with the “Life Saving Award,” and said, “I wasn’t expecting anything like this.”  CFD Fire Chief Eddie Hatmaker said this was the first life saving act he can remember in all his years with the department.

“That’s the ultimate goal for a firefighter- to save a life.  I’m thankful the Good Lord put me in the place at the right time,” the mayor/firefighter said. 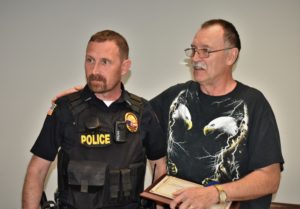 Stooksbury was quick to turn Friday’s noon hour gathering from a “me” event into a “we” event.  He praised Caryville Police Officer James McCall (L above), who was on hand, saying I got her to the door, and James  helped me get her in the yard.

Firefighters arrived at the home three minutes after the call was dispatched and contained the fire to the left back bedroom.  That’s where they located the body of 63-year- old Michael Chercourt, Cathy’s husband.

2 Replies to “‘Saving a life is the ultimate goal’ – Bobby Stooksbury, firefighter”