The late Carl Pierce would always contend that if every man raised a daughter, it would be a different world.  As the father of a daughter and the grandfather of a granddaughter, I agree with Carl.  Friday’s testimony by Gary Christian (TOP PHOTO – introduced to a standing ovation) before a gym full of onlookers at the La Follette Church of God landed with a thud to all in attendance; especially for fathers of daughters.  Christian was the featured speaker at the annual Campbell County Children’s Center Child Abuse Awareness luncheon.

Christian’s daughter, Channon and her boyfriend, Christopher Newsom, were brutally murdered in East Knoxville in 2007 in one of Knoxville’s most horrific crimes.  Channon and Chris were ambushed and carjacked the night of Jan. 6, 12 years ago, in an apartment parking lot in North Knoxville.  They were bound by their attackers and driven away in Channon’s Toyota 4-Runner to a house on Chipman Street, just off North Cherry St. 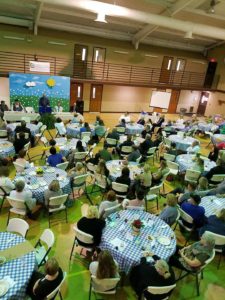 Channon and Chris were kidnapped, beaten, tortured and raped.  Chris was shot three times and died first, his body then being burned beyond recognition and later found near railroad tracks not far from Chipman Street.  That was on January 7.  Channon was found a couple of days later in the Chipman Street house.  Gary Christian described her as being hog-tied and wrapped in garbage bags stuffed in a trash can.  He said her cause of death was from suffocation.

On Friday, the glasses wearing, well -tanned Gary Christian shared his agonizing journey of being consumed with hate and anger and the loss of “my baby girl” and then how the Lord miraculously redeemed him.  Before appearing at the Children Center’s benefit luncheon, the 63-year- old Christian had already shared his story of redemption with tens of thousands of people at the better part of 100 venues over the past almost two years. 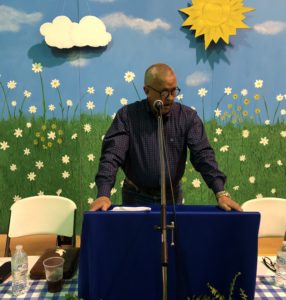 Around a year after the first round of trials, Christian formed a motorcycle club, the Sheperd’s RC (Ride for Channon) to keep his daughter’s memory alive.  Two years ago this month is when he said he was tired; tired of being sad, tired of no joy and tired of being angry all the time.  It was with his club members, on Channon’s birthday, April 29, 2017, and on her grave, that he fell on his knees and prayed  to God wanting his joy and peace back.  “The Lord restored me right there.  It all came back like a miracle,” he said.

“I’m telling you there’s not a dark enough, black enough, cold enough hole for you to crawl in that our Lord cannot restore you. I am living, breathing, real-life proof that God will never forsake you for anything.  If he can bring me home, he can bring you home,” said Christian. 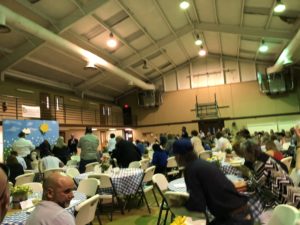 My message to you is “there’s nothing you’ve broken that he (God) can’t fix.  You’ve done nothing that he can’t forgive.  And parents don’t ever let your child leave your sight without telling them you love them.  There are no guarantees in this life.”  (WLAF NEWS PUBLISHED – 04/15/2019-6AM)

One Reply to “Christian was graphic, haunting, captivating”