In Dec. 2018, Walker was found guilty of passing worthless checks over $1,000. Following the bench trial, where she represented herself, she was given a three-year probation sentence. Last month, she allegedly violated her probation by having two guns in her home, according to court records. People placed on probation aren’t allowed to have weapons. 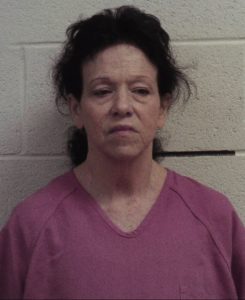 Last Monday, she appeared in criminal court to face the violation of probation of charge. Walker (above) asked for time to hire an attorney and was given a return date of Monday, April 29.

She has also appealed her guilty conviction and subsequent probation. The appeal is pending.

The 57-year old Walker, a local business owner, has had multiple legal and financial issues in the past. She has 17 prior passing worthless check charges that date back to 2005. She also has a prior weapons charge from 2017.

She has owned notable area businesses in the past such as Natural Sorb, which held contracts with the military, and local eatery, The Diner.

Walker no longer owns these businesses. However, she is currently attempting to get another government funded business off the ground, Volunteer Products, according to the presentencing report completed after her guilty verdict.  (WLAF NEWS PUBLISHED – 04/15/2019-6AM)