Afternoon traffic onlookers witnessed a bizarre event unfold on Monday afternoon around 3 pm.    The strange incident began in the parking lot of the Wal-Mart, carried down the four lane to Cove Lake Park, back up the four lane through Jacksboro and into the driveway of  La Follette home.

A young woman told Jacksboro Police Officer Zach Wright she was sitting in the parking lot at Wal-Mart when a man, later identified as 26-year -old Jeffrey Scott Barbe, La Follette, approached her and allegedly told her “She had killed her son” who was asleep in the back seat of her vehicle.  The woman told Barbe, pronounced barb, that she needed to leave to which Barbe responded “no” and reached inside her car attempting to keep her from leaving, according to the report. The woman fled to Cove Lake State Park but soon realized  Barbe had followed her to the park.  That prompted her to call police as she left the park and drove back to Jacksboro. 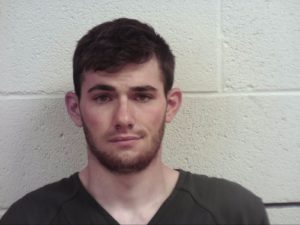 Near Jacksboro Middle School  Wright located the vehicle described as a white semi.  The truck had a small pick-up that appeared to be a pilot vehicle piggybacked on it.  The patrolman attempted to initiate a traffic stop, but Barbe continued east on the four lane at about 40-miles per hour.  JPD Officer Jordan Huskey joined Wright as the vehicles traveled past Wal-Mart with Barbe still not stopping.

Wright details in his report that at the Fazoli’s/Marathon stop light Barbe moved into the emergency lane and drove in it to the 2300 block of Jacksboro Pike where he turned into a driveway behind Family Dollar.   Barbe had actually driven to his home with officers trailing him.  When Barbe stopped, officers executed a felony takedown, the report said.

Barbe, according to the report, said he had a firearm on him and one in the floorboard at his feet.  After his arrest, Barbe allegedly told police he didn’t stop because there were dead people at his home.  Campbell County Sheriff’s Department staff including Chief Deputy Jeremy Goins, Lt. Matt Wasson, Sgt. Cody Chapman along with Deputies Dusty Davis and Dakota Williams cleared the home finding there was no one inside.

Barbe was allegedly jittery and incoherent  through the incident.  He allegedly told police he had “smoked marijuana and done cocaine this morning.”  Barbe is described in the report as speaking incoherently about what happened at Wal-Mart stating “I’ll be honest.  I was going to kill her.”

When Barbe saw the victim parked beside the Family Dollar waiting to speak with officers, he became belligerent and started screaming  “That was her and that he knew he should have killed her,” according to the arrest report.

Barbe is free this morning on a $50,000 secured bond and is due in court on Thursday.  He faces multiple charges that include felony evading arrest, reckless driving, reckless endangerment, roadway laned for travel, driver’s to exercise due care, possession of a schedule II controlled substance (cocaine), driving under the influence (DUI), aggravated assault, violation of implied consent law, false imprisonment and possession of a firearm while driving under the influence (DUI).  (WLAF NEWS PUBLISHED – 04/24/2019-6AM-PHOTO COURTESY OF THE CAMPBELL COUNTY SHERIFF’S DEPARTMENT)

3 Replies to “Barbe tells police, ‘I’ll be honest. I was going to kill her.’”