The news hit heavy.  The news that beloved Bluegrass DJ Larry Carter passed away suddenly Tuesday afternoon at Tazewell.     Big Lare, as he called himself on the Wednesday night airways of WLAF, was due to arrive at the North 5th Street studios about the time the call of the sad news came.

TOP PHOTO:  Larry Carter is shown here in the WLAF Studio in La Follette in early April of this year. 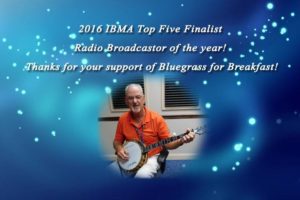 Larry picked music, and he played music on the radio.  In 2016, he was a Top 5 Finalist for Radio Broadcaster of the Year.

“Larry Carter will be truly missed,” said Honey Bee of WLAF.  She goes on to say, “my heart goes out to his family and all his listeners.”

Larry was kind enough to come in early this week for his live show for the month of May since WLAF is airing Cougar Baseball on Wednesday evening.  Instead, after the ball game broadcast, Wednesdays will be without that friendly voice that brought such a library of bluegrass knowledge to its listeners. 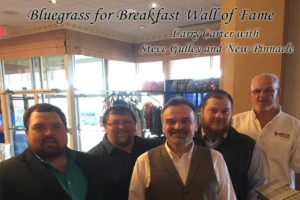 Larry, far right, was on a first name basis with many nationally known musicians, in particular Bluegrass.

Bee said, “Larry always made sure I had the Top 30 and would send more Bluegrass for us to play.  He never failed to bring music and a Mountain Dew for me.”

Funeral arrangements are being handled by Coffey Funeral Home of 937 N. Broad St., New Tazewell, Tennessee 37825.  The family will receive friends Friday from 4 pm until 7 pm at Coffey Funeral Home with the funeral service to follow at 7 pm Friday night in the Coffey Funeral Home Chapel.  Graveside service will be Saturday at 11 am and burial place will be announced later.Connect HERE to Coffey’s website.  (WLAF NEWS PUBLISHED – 05/02/2019-6AM)